What is a Macro Virus? - SentinelOne

What is a Macro Virus?

A macro virus is a computer virus written in a macro language, such as those used by popular productivity applications such as Microsoft Office. Macro viruses are typically spread through infected documents or templates shared between users and can be activated when the user opens the infected file. Once activated, the virus can execute its malicious code, ranging from simple annoyance to more serious damage, such as data corruption or theft. Macro viruses are often difficult to detect, as they can be embedded within legitimate macros and difficult to remove once they have infected a system.

Why Are Macros a Security Risk?

Macros can be a security risk because they can be used to execute malicious code on a system. In the case of macro viruses, the malicious code is embedded within a macro and is activated when the infected document or template is opened. This allows the virus to execute its code without the user’s knowledge or consent, potentially causing various types of damage, such as data corruption or theft. Additionally, attackers can use macros to bypass security controls and gain unauthorized access to systems and networks. This is why it is important to only enable macros from trusted sources and to regularly scan your system for malware using a reputable antivirus program.

What are the Characteristics of a Macro Virus?

What Are The Symptoms of a Macro Virus Infection

The symptoms of a macro virus infection can vary depending on the specific virus, but there are some common signs that a system may be infected. Some of these symptoms include:

If you suspect your system may be infected with a macro virus, it is important to immediately run a full system scan using a reputable anti-malware program and contact your IT administrator. If the infection is confirmed, it is important to follow the instructions provided by the antivirus program to remove the virus and restore your system to a healthy state.

Can a Macro Run Automatically?

Yes, a macro can run automatically in certain circumstances. In most cases, macros must be enabled by the user for them to run. However, some macro viruses are designed to run automatically when the infected document or template is opened without the user’s knowledge or consent. This is one of the reasons why macro viruses can be so dangerous, as they can execute their malicious code without the user’s awareness. To protect against this type of threat, it is important to only enable macros from trusted sources and to regularly scan your system for malware using a reputable antivirus program.

Can a Macros Infect with Ransomware?

It is difficult to say whether any specific security breach was specifically caused by a macro virus, as there are many potential causes of security breaches. A macro virus can be used to deliver a ransomware infection. Ransomware is malware that encrypts the victim’s files and demands a ransom payment to decrypt them. A macro virus may sometimes deliver the ransomware payload by embedding the malicious code within a macro in a document or template. When the user opens the infected file, the macro virus is activated and can execute the ransomware, encrypting the victim’s files. The victim is then presented with a ransom demand, typically in the form of a message on the screen or a notification in the infected system’s notification area. It is important to note that paying the ransom does not guarantee that the victim will be able to recover their files and that the best way to protect against ransomware infections is to implement strong security measures and regularly back up important data.

Can Macs Get a Macro Virus?

Yes, Macs can get a macro virus. Macro viruses are not limited to any specific operating system, and can potentially infect any device that can run the macro language in which the virus is written. In the case of Macs, if a macro virus is written in a language that can be used on a Mac, such as AppleScript, the Mac can be infected with the virus. It is important for Mac users to be aware of the potential threats posed by macro viruses and to take steps to protect their devices, such as only enabling macros from trusted sources and regularly scanning for malware using a reputable antivirus program.

OSX.BadWord is a threat exploiting a Microsoft Word for Mac sandbox escape and delivering a Meterpreter payload. Like similar Word-based attacks on Windows, this leverages a VBA macro to execute code and infect the user. OSX.BadWord is distributed via an email to staff of the Quidax cryptocurrency platform, inviting them to contribute to “BitCoin Magazine UK”. 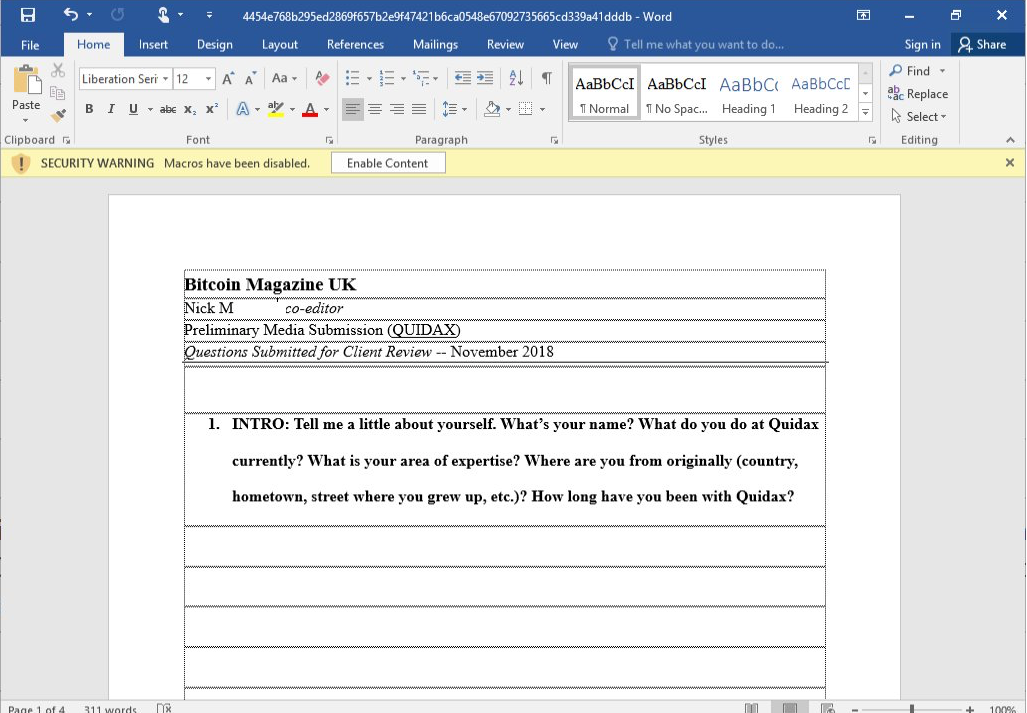 in 2018, the North Korean-linked APT group Lazarus was actively targeting cryptocurrency exchanges. In March, researchers discovered a weaponized Word document being used as a dropper for a macOS backdoor. The document, written in Korean, was one of a number used in a campaign targeting South Korean businesses and cryptocurrency exchange companies.

Can Linux Get a Macro Virus?

In theory, Linux could potentially be infected with a macro virus. Macro viruses are not limited to any specific operating system and can potentially infect any device that can run the macro language in which the virus is written. While Linux is generally considered more secure than other operating systems and less commonly targeted by malware, it is not immune to all types of threats, including macro viruses. If a macro virus is written in a language that can be used on Linux, such as a Linux-specific macro language or a cross-platform language like Java, the Linux system can be infected with the virus. To protect against this threat, Linux users must take appropriate security measures, such as only enabling macros from trusted sources and regularly scanning for malware using a reputable antivirus program.

What is an Example of a Macro Virus?

An example of a macro virus is the Melissa virus, which was first discovered in 1999. The Melissa virus was written in the Visual Basic for Applications (VBA) macro language and was spread through infected Microsoft Word documents. When a user opened an infected document, the virus would execute its code, which included replicating itself by sending infected emails to the first 50 contacts in the victim’s Outlook address book. The Melissa virus caused significant disruption, quickly spreading to thousands of computers and overloaded email servers. It is considered to be one of the first widespread email worms. While the Melissa virus is an example of a macro virus, it should be noted that new macro viruses are constantly being created, and individual viruses’ specific characteristics and behaviors can vary greatly.

Can an Office Document have Malware that is not a Macro Virus?

Yes, an Office document can potentially contain malware that is not a macro virus. While macro viruses are a common type of threat, they are not the only type of malware that can be embedded in Office documents. Other types of malware, such as Trojans, worms, or ransomware, can also be hidden within an Office document and activated when the user opens the file. In some cases, the malware may not be written in a macro language and may instead use other methods to execute its code. For example, the malware may exploit vulnerabilities in the Office application itself or the operating system to execute its code without the user’s knowledge or consent. It is important for users to be aware of these types of threats, and to take steps to protect themselves, such as only opening Office documents from trusted sources and regularly scanning for malware using a reputable antivirus program.

In this video, you can see how SentinelOne agent, set with detect only mode, can detect a Word-based malware attack that doesn’t use a macro. This document has two embedded OLE objects; each contains JScript and runs a cmd command that spawns Powershell and executes malware.

How can I stay Safe from Macro Malware?

As an end user – to stay safe from macro malware, there are a few things you can do:

As a CISO, or IT administrator, there are several steps you can take to help keep your organization safe from macro malware:

It is unlikely that Microsoft will cancel macros because of security concerns. Macros are a valuable tool for automating tasks and improving productivity, and they are widely used in many different applications. While certain security risks are associated with macros, such as the potential for macro viruses and other types of malware, these risks can be mitigated by following best practices and implementing appropriate security measures.