What is Lateral Movement? Definition & Examples

Cyber-attacks are becoming more rampant and sophisticated as more users and organizations fall prey to them. One of these sophisticated attacks is known as the “Lateral Movement Attack.”

Lateral Movement Attacks are possible because cyberattacks rarely occur at the point of entry; this is just where a hacker gains access. Cybercriminals often will then laterally work through a system, in order to access the most sensitive information. Unfortunately, too many users and companies don’t know how to upgrade their cybersecurity practices to stop these attacks.

A recent data report shows that many organizations have poor cybersecurity practices, making them vulnerable to data loss, malware infection, and other security threats. To keep up with the changing landscape of cybersecurity, it’s essential to understand all facets of a cyber-attack, including lateral movement attacks and other examples of this sort.

In this article, you’ll learn everything you need to know about lateral movement attacks, including how it works and how to detect and prevent it from infiltrating your systems.

What is Lateral Movement?

There are many different lateral movement techniques that attackers can use, but the common ones include:

Lateral movement techniques are often used in combination with each other in order to increase the chances of success. For example, an attacker might use pass-the-hash to gain initial access to a system and then use those credentials to authenticate to other systems on the network.

The UK’s National Cyber Security Centre notes that after cybercriminals have gained an initial foothold in a network, they look to expand and solidify that foothold while acquiring further control of valuable information or systems–which is what makes lateral movement so dangerous.

How Lateral Movement Works: The Stages of the Attack 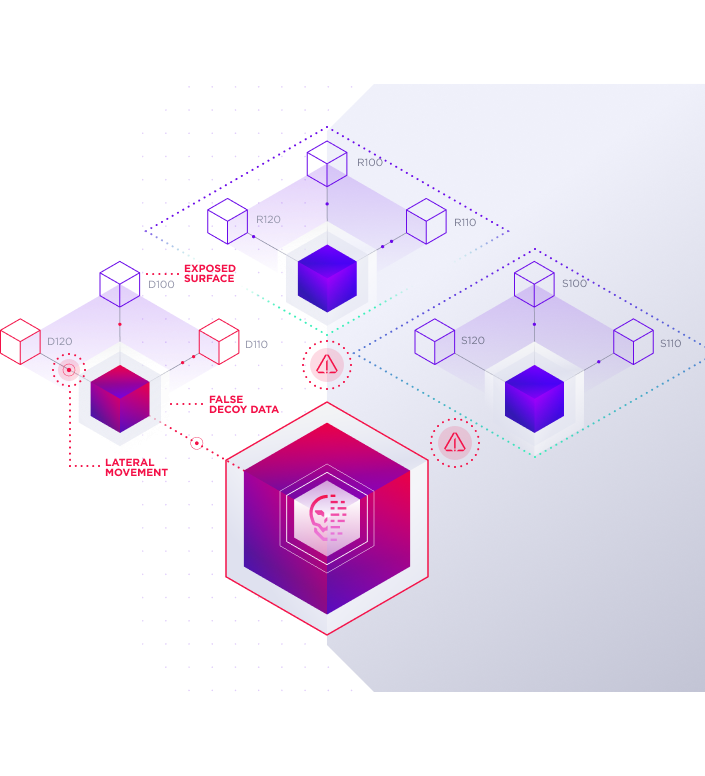 One thing to know about cyberattacks is that they follow a well-defined process or what is known as the “kill chain.” A cyber kill chain is a methodology cybercriminals use to execute cyber-attacks. It’s a linear model that outlines an attacker’s steps from identifying a target to successfully exfiltrating its data.

When it comes to lateral movement attacks, there are several stages in the kill chain that attackers use:

This is the first stage of the lateral movement attack and is also the most important because it sets the stage for the rest of the attack. During this phase, attackers gather as much information about their target as possible.

This includes collecting data about the network infrastructure, users, and systems. They use tools like Google dorks, social media, and other open-source intelligence (OSINT) techniques to collect data about their target.

A reconnaissance stage will also include:

Ultimately, the attackers gain control of their targets (such as a domain controller, an important system, or sensitive data). They steal credentials that give them what appears to be legitimate access to more host naming conventions and servers. After achieving these objectives, the data can be exfiltrated, and devices become sabotaged.

At this stage, attackers use the credentials they acquired in the previous stage to move laterally across systems and expand their foothold in the network. They do this by accessing other systems and devices on the network using tools like Remote Desktop Protocol (RDP), Windows Management Instrumentation (WMI), and Server Message Block (SMB).

These tools allow attackers to move laterally across devices and systems on the network without re-authenticating and give them unlimited access to sensitive data and systems.

This is the final stage of the lateral movement kill chain–and the one that’s most important to protecting you or your clients’ data. This is because once cyberattackers have accessed your systems, detecting and stopping them can be nearly impossible.

SentinelOne can end all lateral movement attacks by protecting your network through AI and automation at every stage of the lifecycle threat. As the first and only XDR vendor to participate and lead the ATT&CK Deception Evaluation, their Singularity XDR platform demonstrates the most powerful, autonomous XDR platform, reducing the enterprise attack surface across human, device, and cloud attack surfaces.

Singularity XDR provides an effective combination of prevention, protection, detection, and deception capabilities to stop attackers early whether they are attempting to establish a beachhead inside the network or compromising identity data to move laterally, escalate privileges, and acquire targets. Get a Demo of SentinelOne.

Why Attackers Use the Lateral Movement Technique

Lateral movement can also be attributed to two main causes: a live attacker traversing a network, or malicious code with automatic spreading abilities such as a worm. The techniques to perform lateral movements can include utilizing exploits such as the EternalBlue SMB exploit, using remote desktop protocols, using harvested credentials with tools/interfaces like Powershell and WMI, and executing code on a remote machine.

Given that the vast majority of the above techniques are fileless methods, most traditional security controls have a hard time identifying an attacker or a piece of code moving within a network. The stealthy nature of these attacks make them highly efficient and lucrative for the attacker, as well as allow mass infections. To prevent lateral movement attacks, it’s essential to understand why attackers use the lateral movement technique.

On average, a phishing attack takes 213 days to detect and 80 days to contain. Two hundred and thirteen days is a lifetime in lateral movement attacks, providing the attacker ample time to move laterally, establish persistence, conduct reconnaissance, and gain credentials.

And because it seems as though a legitimate user is moving laterally across the network or cloud,  the security and network monitoring tools will fail to detect an attack.

This means that even if the original device was determined to be infected, the attacker could already have moved throughout the network and remain invisible inside the target for an extended period while looking for the best chance to escalate the attack. This takes us to:

The attacker can learn about the vulnerabilities of different systems by moving laterally and observing how each system works. And, they can do this for weeks or months before they conduct their final attack.

Another reason attackers use the lateral movement technique is to gain elevated privileges for a network instead of trying to breach that network from the outside. Using legitimate credentials will enable attackers to quickly escalate their privileges on a network and control sensitive data and systems.

How to Detect & Prevent Security Threats That Use Lateral Movement

Lateral movement attacks are difficult to detect and prevent because they use legitimate credentials and tools that keep cybercriminals undetected for a long time. However, there are some best cybersecurity practices that you can follow to reduce the risk of lateral movement attacks. They include:

The first thing is to understand what systems and devices are on your network. This will help to build a wall around what needs to be protected. Here, your cybersecurity attention should shift from perimeter protection to in-network detection.

The second practice is investigating and understanding what permissions and identities exist on your network. This will help to determine what legitimate users are supposed to be doing–and what they’re not.

Here, you must understand what systems each user has access to and what they are allowed to do with those systems. You can create a Zero Trust Architecture (ZTA) to deal with this challenge by providing identities with only the necessary access level they need to operate and validate their identities. 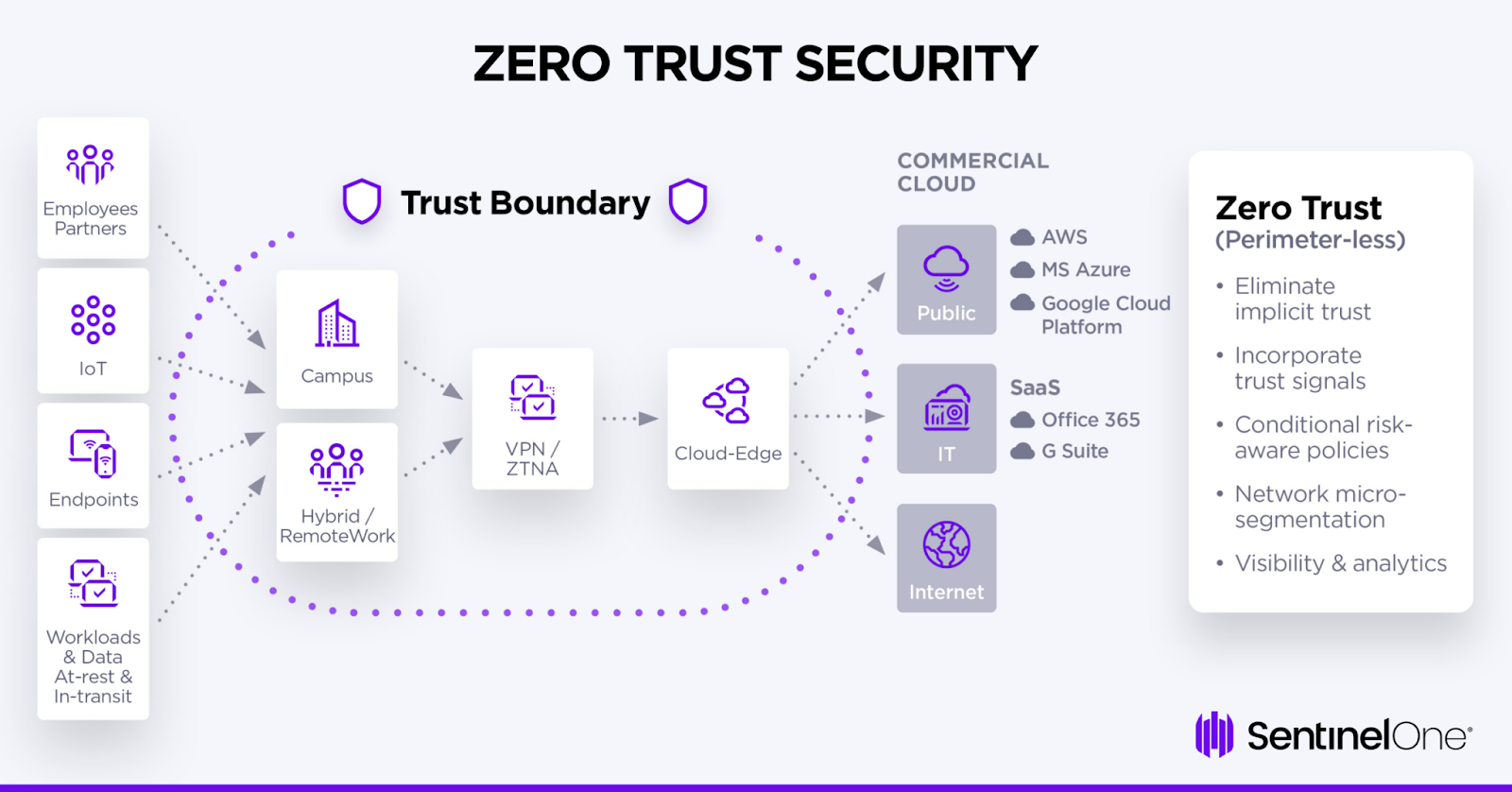 The main message behind the design can be summed up through the phrase “never trust, always verify.” Put simply, a zero trust design approach is a strategic initiative that assumes there are attackers within and outside of a network, in a sense, eliminating all “trust” from an organization’s network architecture.

At this stage, you need to measure your security tools’ detection accuracies and ensure they are working as expected. For instance, a user who usually accesses files from one location is now accessing them from another location. This could be a sign that the user’s credentials have been compromised, and someone is trying to use them to move laterally on the network.

The best way to identify lateral movement and other cyber threat issues is to adopt a trusted cybersecurity process that benefits every member of your organization. SentinelOne’s Lateral Movement Detection engine utilizes the platform’s low level monitoring to gain visibility into all machine operations, including the above script language and protocols.

It’s able to detect and mitigate lateral movement attacks in real-time by building execution context in real time and applying Behavioral AI to identify the anomalies in usage of these various techniques to move around in the network, preventing the spread of malware or a “roaming” attacker. You can see how it works here:

Lastly, you must automate and orchestrate your responses to lateral movement attacks. This will help to speed up your response time and reduce the chances of a successful attack.

You can use security orchestration, automation, and response (SOAR) platforms to help you with this. These automation platforms will accelerate and simplify incident response by addressing detected threats and stopping them from escalating through the network.

The type of detection and visibility offered by the SentinelOne Lateral Movement Detection is far superior to every other EDR tool out there and is integrated holistically for automated operation into our 2.0 platform–no configuration needed.

SentinelOne is the world’s leading next-generation endpoint security platform. It has been purpose-built to stop threats at every stage of an attack lifecycle. The platform provides comprehensive visibility, protection, and response capabilities in a single agent/console architecture. It proactively protects your business from lateral movement attacks. You can see for yourself by scheduling a demo today.