What is Cyber Threat Intelligence? | SentinelOne

Threat actors, or people or organizations that intentionally cause harm within the digital realm, pinpoint and exploit weaknesses in computers and networks to carry out attacks on targets. Cyber threat intelligence, or collecting and analyzing information about past, current, and future cybersecurity threats, can help organizations better understand a threat actor’s motives with the use of data analytics.

However, even after a cyberattack takes place, many organizations have a hard time figuring out exactly what happened and when. In fact, many instances of cybercrime today go unnoticed and unpunished.

Using data gleaned from threat intelligence, organizations can better protect themselves against cyberattacks before and during the incident. This information can also help organizations address any security issues after the attack. 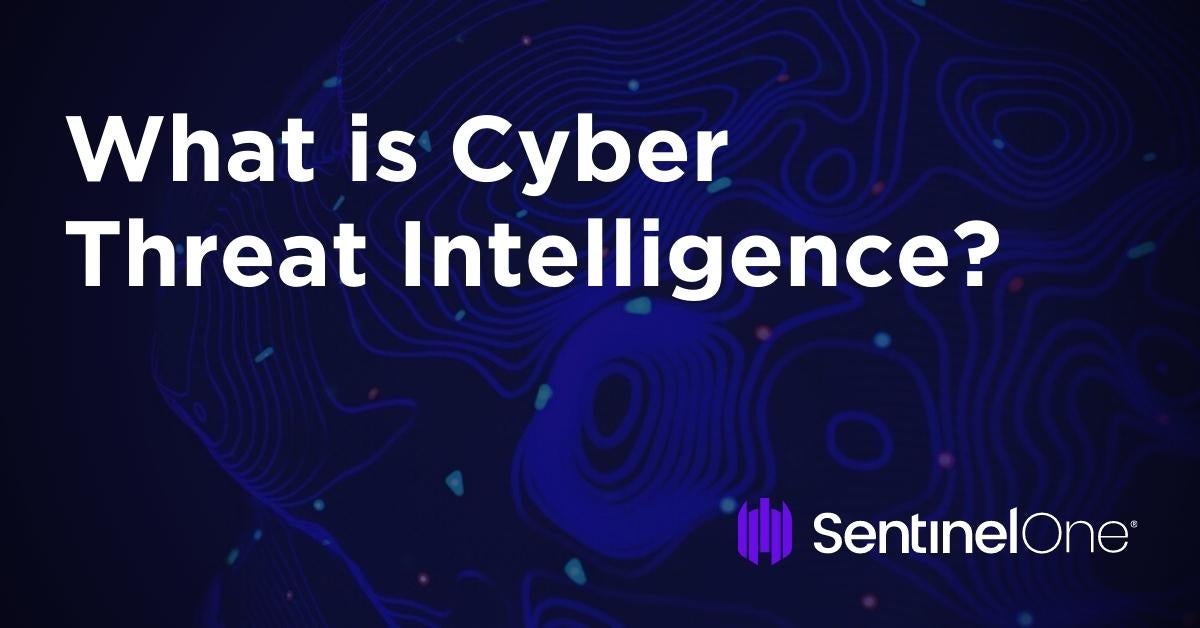 According to Gartner, threat intelligence is “evidence-based knowledge (e.g., context, mechanisms, indicators, implications, and action-oriented advice) about existing or emerging menaces or hazards to assets that can be used to inform decisions regarding the subject’s response to that menace or hazard.”

In cybersecurity, threat intelligence is the data an organization collects, processes, and analyzes to better understand threat actors’ motives, targets, and attack behaviors. Using this information, organizations can make fast, informed decisions to protect themselves against threat actors in the future.

Why is Threat Intelligence Important?

Today, the threat landscape is more dynamic and sophisticated than ever before. Anticipating a threat actor’s next move is incredibly challenging, especially without data to back up any assumptions. Threat intelligence guides an organization’s assessment of threat actors’ past behaviors, what they’ll do next, and where protection is needed.

Threat intelligence has become an increasingly common capability among security tools and is a key component of security architecture that helps security teams detect and investigate threats.

For most organizations, the threat intelligence life cycle consists of six stages: direction, collection, processing, analysis, dissemination, and feedback. However, the specific activities performed during each phase of the threat intelligence life cycle are often slightly different depending on the organization and are usually determined by a combination of unique factors including use cases, priorities, and risk.

Ideally, key stakeholders will clearly define the organization’s goals and objectives for threat intelligence before any other phases begin to ensure the success of the entire life cycle. Once threat intelligence goals are set, they may be subject to change depending on the data collected and the feedback received. Data is gathered from a wide variety of sources, including internal, technical, and human components, and then used to develop a more complete picture of potential and actual threats.

Once enough data is collected, it is turned into actionable intelligence that is both timely and clear to everyone, including key stakeholders who will use the information to improve future threat intelligence life cycles and refine their decision-making processes. 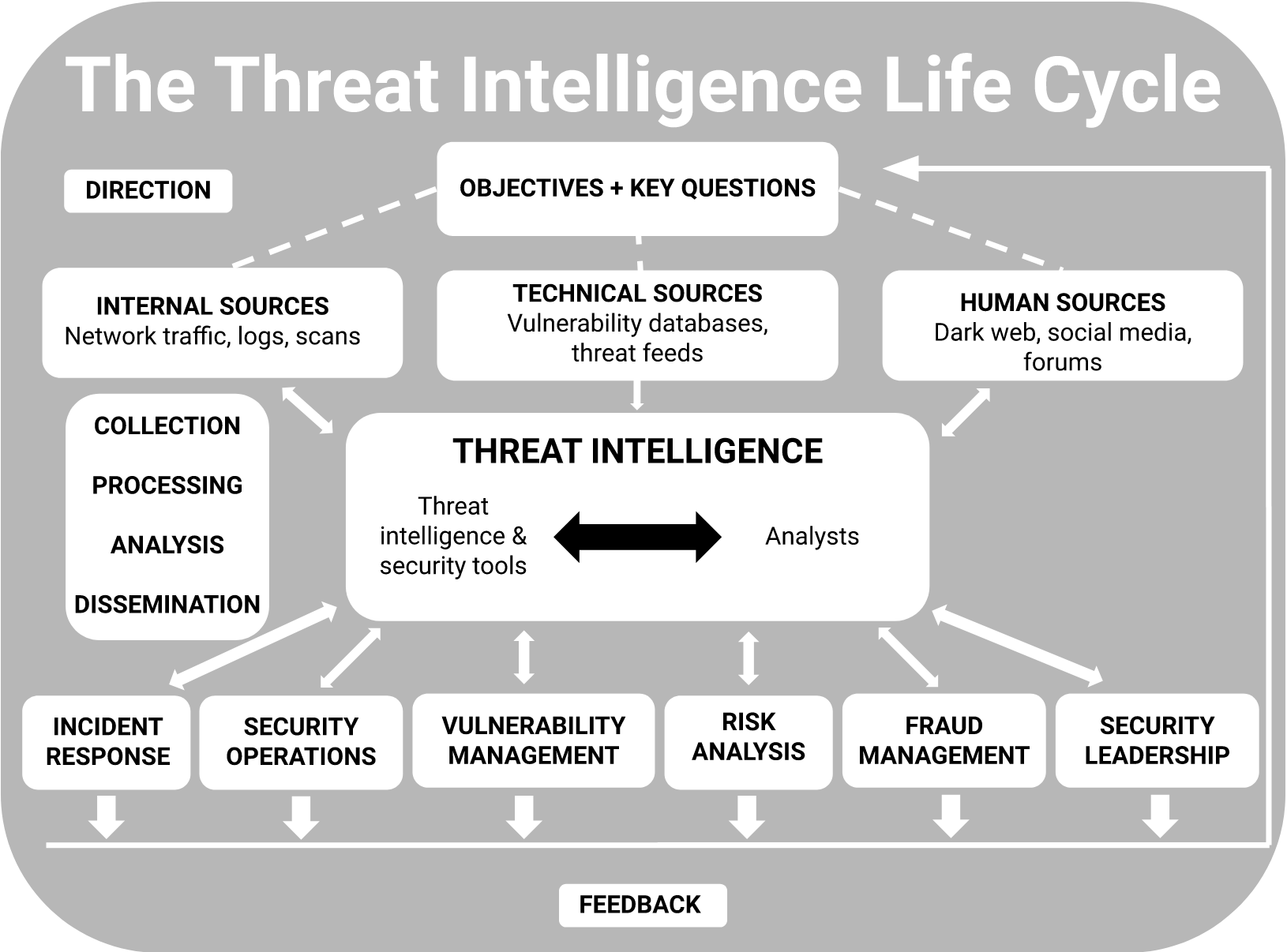 This phase of the threat intelligence life cycle involves gathering information that addresses the most important intelligence requirements. Data collected is usually a combination of finished information (e.g., intelligence reports from experts and vendors) and raw data (e.g., malware signatures or leaked credentials).

Collection typically occurs through a variety of sources, including:

This phase of the threat intelligence life cycle involves transforming collected data into a usable format, with different means of processing for different collection methods. For instance, raw data must be processed by humans or machines in order to be considered usable, and all human reports should be correlated and ranked, deconflicted, and checked.

This phase of the threat intelligence life cycle involves turning processed information into intelligence that can inform decisions.  For example, those decisions could involve whether to investigate a potential threat, what actions an organization should immediately take to block an attack, how to strengthen security controls, or how much of an investment in additional security resources is justifiable.

The presentation of this analysis is also important. Organizations may collect and process endless amounts of information and then present it in a way that can’t be understood or used by decision-makers.

To communicate analysis with a non-technical audience, consider the following recommendations:

The format used to present such information will depend on the intelligence itself and the intended audience. Intelligence teams often provide analysis via a variety of formats, including live videos, slide decks, and formal reports.

This phase of the threat intelligence life cycle involves distributing the finished intelligence output to the right departments and teams.

For each intended audience, ask the following questions:

This phase clarifies the overall priorities and the requirements of the security teams that consume the intelligence. Ultimately, their unique needs will guide all future phases of the intelligence life cycle, including:

A cyberattack occurs when there is any type of unauthorized access to a system or network by a third party, carried out by a threat actor. Although various terms are often used interchangeably to describe different types of cyberattacks, there are some important differences worth noting.

A threat is a person or event with the potential for negatively impacting valuable assets. Although a variety of cyber threats may exist at any given time, threats themselves symbolize the possibility of an attack occurring, rather than the actual attack itself.

Threats may pose an imminent danger, but do not cause harm until they are acted upon by a threat actor. The term “threat” is often used in reference to a wide variety of malicious activities that seek to damage, steal, or prevent access to data. Once a threat becomes a reality, it is then known as a cyberattack.

A vulnerability is an inherent defect in a network, software, or system’s design that can be exploited by threat actors to damage, steal, or prevent access to assets. The most common types of vulnerabilities include system misconfigurations, out-of-date or unpatched software, missing or weak authorization credentials, missing or poor data encryption, and zero-day vulnerabilities (which are defined below).

An exploit is a method threat actors use to take advantage of a vulnerability. It might include software, data, or commands that manipulate the vulnerability so the threat actor is free to perform unwanted or unauthorized actions.

Exploits can be used to install unwanted software, gain unauthorized access to sensitive data, or take control of a computer system. They’re frequently used in tandem with other attack methods.

An advanced persistent threat (APT) is a broad term describing an attack campaign in which a threat actor establishes a long-term presence on a network to conduct reconnaissance or collect highly sensitive data. APT attacks typically require more resources than a standard web application attack, and the targets are often carefully chosen and well-researched.

The most common types of APT attack vectors are:

Fortunately, using cyber threat intelligence can help protect organizations against many of the cyber threats above to prevent cyberattacks.

Cyber Threat Intelligence is a broad term that can be broken down into several subcategories.

Strategic threat intelligence involves looking at long-term, non-technical issues. By creating an overview of the threat environment (i.e., cyber threats and the risks associated with them), the use of strategic cyber threat intelligence can help organizations make more informed business decisions. This information allows decision-makers to invest in tools and processes that will safeguard their business in alignment with their overall objectives.

Strategic intelligence is considered one of the more challenging forms of cyber threat intelligence because it often involves human data collection and analysis. For strategic threat intelligence to be most successful, analysts often have a deep understanding of cybersecurity and the current global geopolitical situation.

Operational threat intelligence is a more technical approach, focusing on the nature, timing, motive, and intent of an attack. Using tactics such as tracking and threat actor profiling, organizations can collect data that helps them detect and understand past attacks and predict future threats more accurately with mitigation in mind.

This type of cyber threat intelligence may work in conjunction with other cybersecurity disciplines such as vulnerability management, incident response, and threat monitoring.

Cyber threat intelligence jobs can include:

Learn more about it here.

Cyber threat intelligence can introduce a number of additional benefits for organizations beyond the scope of mitigation, including:

Here are five features to examine when considering a cyber threat intelligence tool:

SentinelOne’s AI-driven learning uses behavioral analysis tools that constantly monitor and look for signs of a security breach. It quickly responds to threats with its ActiveEDR module and gives insightful data that provides a clearer understanding of the cause of an attack and the steps taken to neutralize it.

With innovative threat detection tools that can integrate with third-party applications including Splunk, Okta, BigFix, and more, SentinelOne monitors systems throughout the network and across platforms for in-depth visibility and analysis throughout the entire enterprise and at every stage of the cyber threat intelligence life cycle.

Discover how SentinelOne helps organizations proactively and holistically protect what matters most. Schedule a demo today.