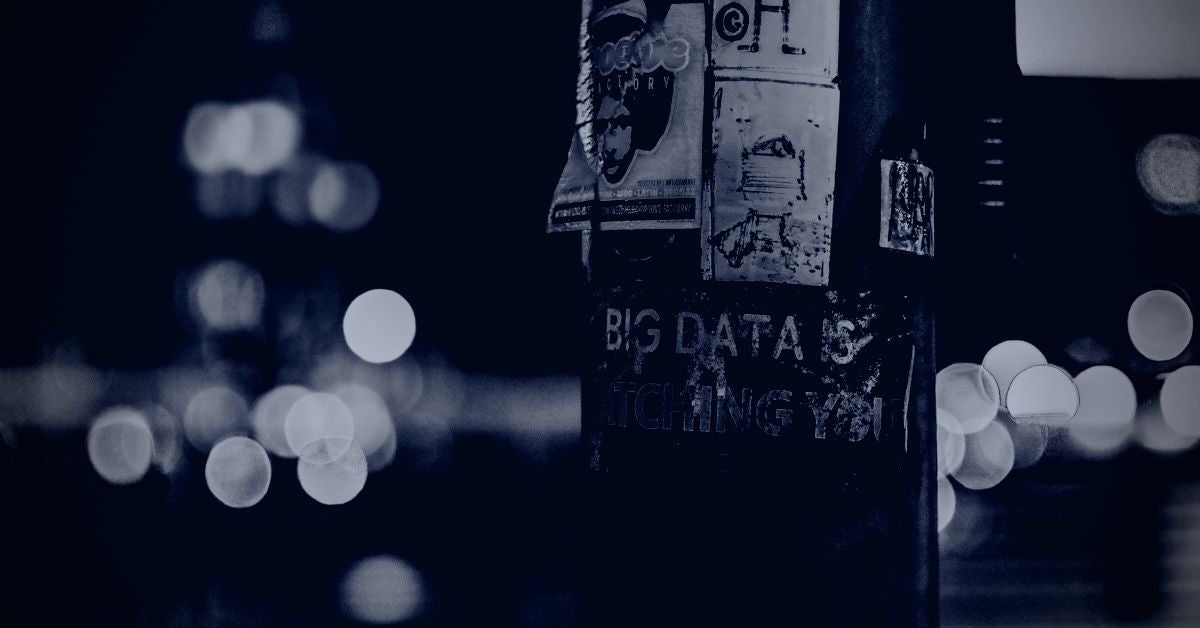 The Ramsay “framework” emerged in late 2019 and was disclosed thanks to a discovery by researchers querying the VirusTotal public malware repository. As of April 2020, there appears to be two fully maintained branches of the toolkit. Although in-the-wild instances of the Ramsay malware appear to be low at present, this may be due to the malware’s highly-specialized objectives. The Ramsay samples discovered to date are heavily focused on both persistence and data exfiltration from air-gapped environments. This suggests the possibility that the malware was developed for advanced targeted campaigns by a threat actor primarily interested in organizations trying to protect the most-sensitive of information. As is often the case with specialized malware, there is also a real danger of it “leaking” or being repurposed to targets that were not in the original threat actors’ sights. 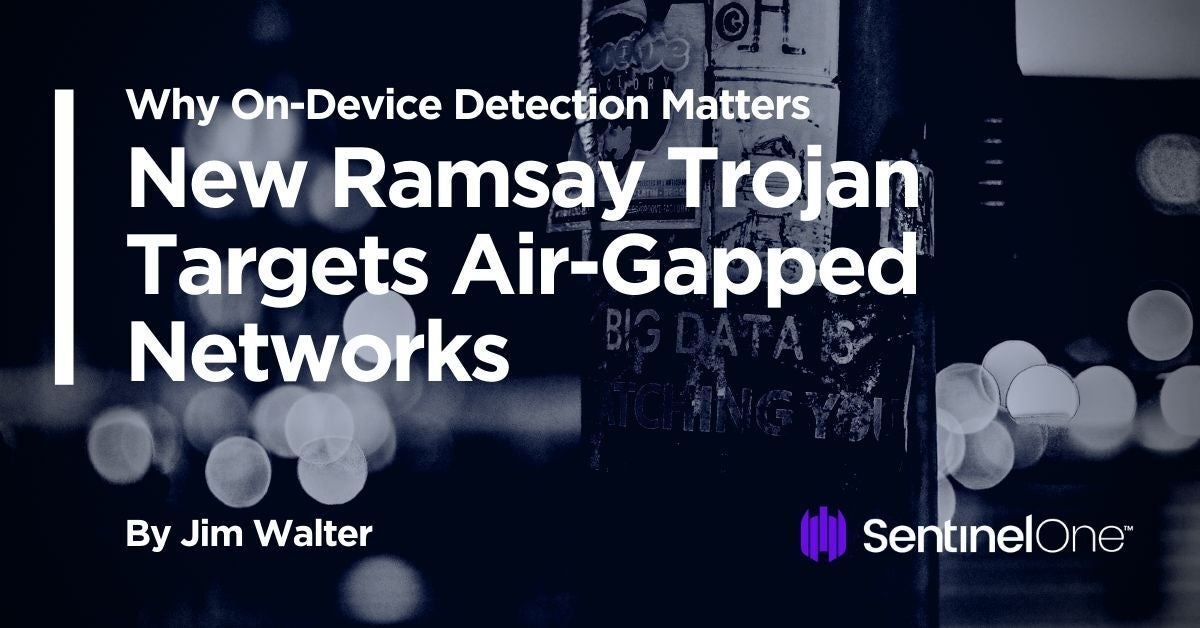 The original version of Ramsay was distributed via maliciously-crafted Office documents. These documents were distributed via email and were designed to exploit CVE-2017-0199 to facilitate the installation of the malware. CVE-2017-0199 is a remote code execution flaw in Microsoft Word. Specifically, it allows attackers to retrieve and launch code, including VBS & PowerShell, upon launching of a specially-crafted RTF document. Several versions of these malicious Word documents were discovered on VirusTotal with names such as “access_test.docx” and “Test.docx”, indicating that the threat actors may have been evaluating how well their malware fared against vendors’ static engines.

Later versions of Ramsay (v2.a/2.b) were distributed as trojanized installers for well-known applications such as 7zip. These later versions also included an aggressive spreading mechanism that locates local and network adjacent PE files and infect them to allow for further spreading in targeted environments.

Version 2.b was also seen to be exploiting CVE-2017-11882. This vulnerability allows attackers to achieve arbitrary code execution as the current user in a MS Office 2016 and several earlier Office Service Pack versions. Both CVE-2017-0199 and CVE-20170-11882 are used for exploitation of client execution (MITRE T1203) purposes.

Along with the spreading capabilities, Ramsay includes multiple techniques for maintaining persistence. These include:

Ramsay’s main goal is data collection and exfiltration. Immediately upon infection, the trojan will begin to locate specific document types, particularly MS Word and PDF format files, and store them in a customized location. The items are also archived and encrypted via RC4, and subsequently compressed with an instance of WinRar installed by the trojan. It should be noted that Ramsay will attempt to collect documents from both local and remote locations where possible. Ramsay also has some built-in “intelligence” to avoid the collection of duplicate/redundant files.

The analysis is ongoing with respect to the data exfiltration mechanism. Current intelligence indicates that an additional component will locate the collected “containers” of documents from infected hosts, identified by special file makers, When the containers are located, AND a Ramsay control file is located on the affected network, data exfiltration can occur via this additional component. Ramsay uses intra-network control files to operate, as opposed to a central command-and-control infrastructure.

Spreading is handled via an additional component, dropped by the main installer. This component will scan and locate accessible drives/locations (excluding A: and B: reserved devices).

Given some level of code reuse, there may be correlation between Ramsay and the Retro Backdoor associated with Darkhotel. As with the data exfiltration piece, analysis of this relationship is ongoing.

Does SentinelOne Protect Against Ramsay Malware?

Yes, it does. Organizations secured by the SentinelOne platform are fully protected against the threat from Ramsay malware, as demonstrated in this video.

Even when the network is disconnected such as with an air-gapped device, the SentinelOne agent will detect the malware locally on-device. 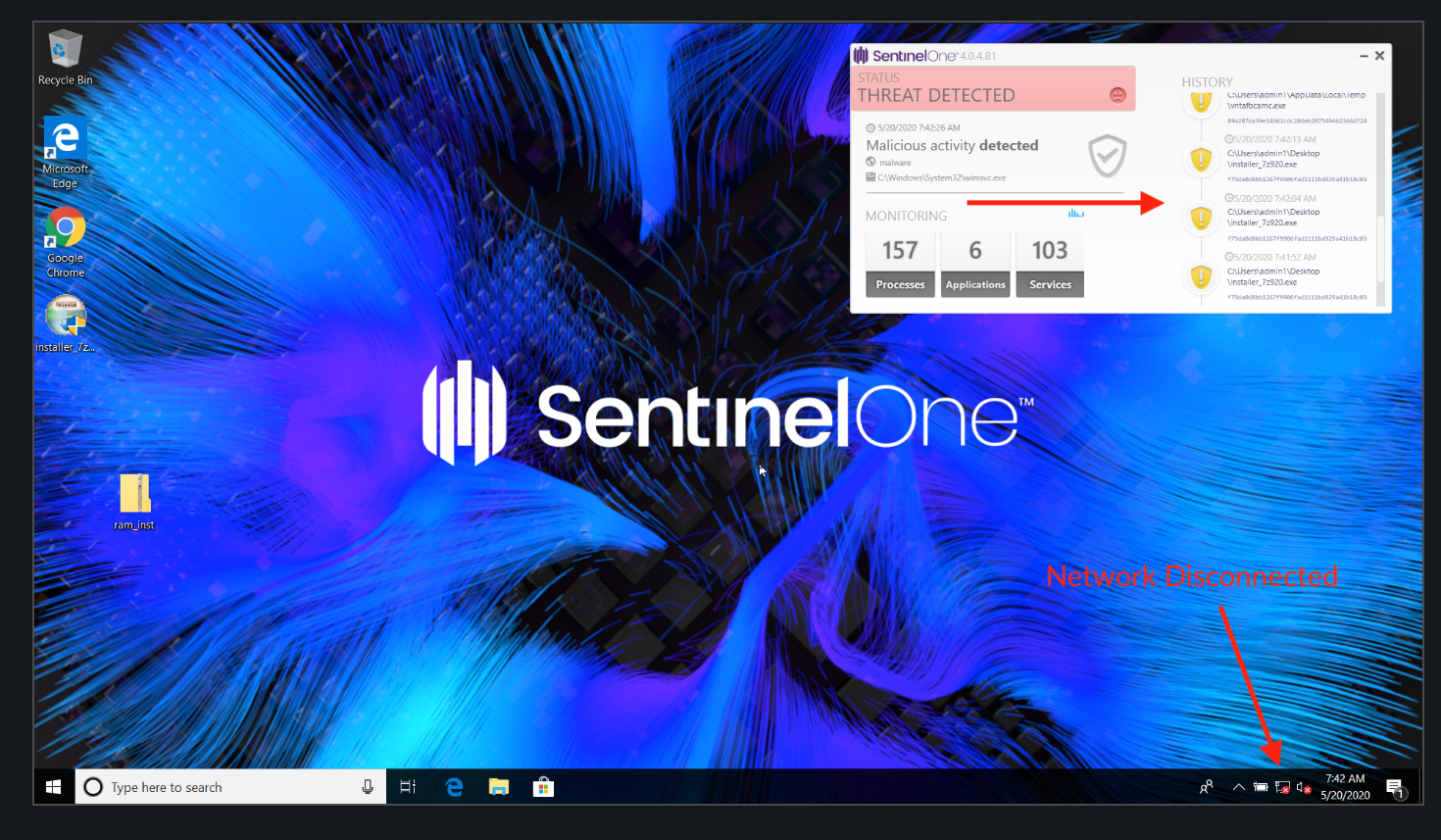 The Ramsay framework is a novel malware toolkit that appears to be under active development by a sophisticated threat actor. While current telemetry suggests this is a highly-targeted attack focused on specific environments, history suggests that a malware toolkit of this nature could soon ‘spread its wings’ and represent a threat to a much wider audience. Moreover, the discovery of this new toolkit targetting air-gapped machines highlights the importance of having a behavioral, AI-driven security solution that can actively detect and respond to threats on the local device without solely relying on cloud-connectivity, human analysts or static reputation engines.

If you are not already protected by SentinelOne and would like to learn more about how our industry-leading platform can help defend your organization against Ramsay malware and all other threats, contact us or request a free demo today.