21 Cyber Security Twitter Accounts You Should Be Following - SentinelOne 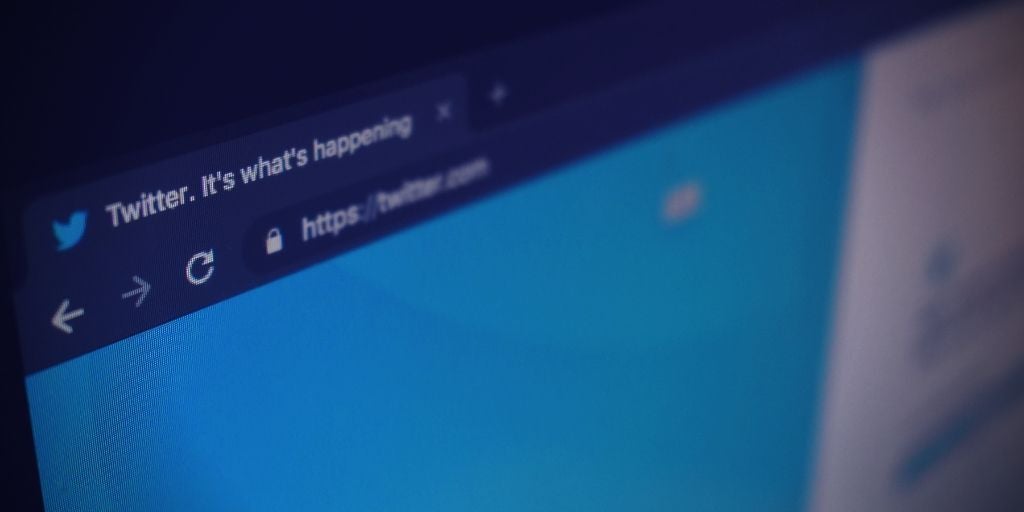 Whether it’s general cybersecurity news that you’re after, malware research, outbreaks, pentesting or reverse engineering, you’ll find a gamut of experts on Twitter sharing their own and others latest insights. Of the many thousands of accounts that you could follow, we’ve hand-picked 21 that between them will not only cover the full spectrum of cybersecurity issues but also, thanks to the wonders of retweeting, curate the most important tweets of those they follow. Our list has some well-established “celebrities” in the field, but you’ll also discover some new, interesting and influential people here, too. 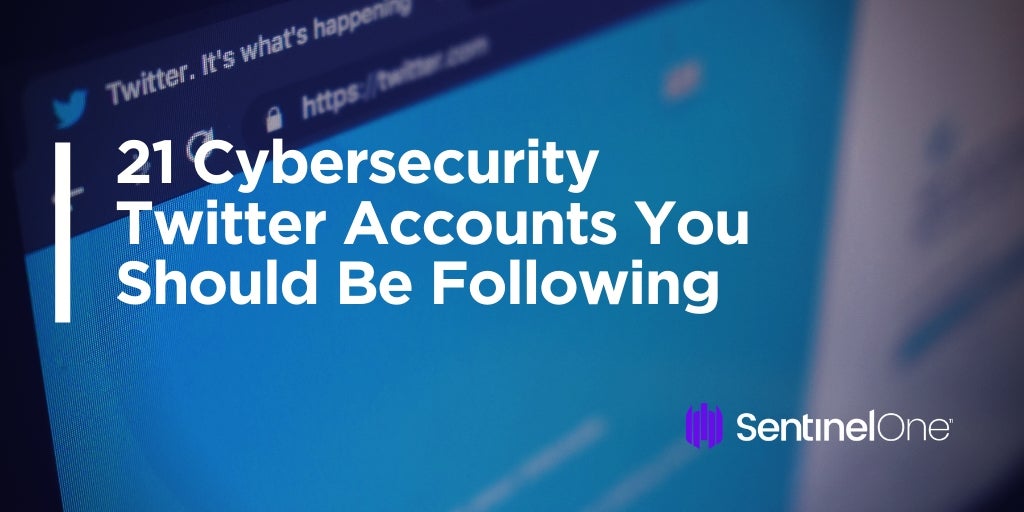 Surprisingly, renowned investigative cybercrime journalist Brian Krebs doesn’t have a technical background in computer security, but turned his attention to the field after his own home network was infected by the Lion worm back in 2001. If you’re looking for in-depth and breaking news on cybercrime and cybersecurity, @briankrebs should be top of your list.

Daniel has been sharing his thoughts on the interactions between technology and society since 1999, long before Twitter was even a twinkle in the social media eye, but he’s always relevant and always interesting. Ever heard of the Intellectual Dark Web? Follow @DanielMiessler and learn all about it and many other aspects of cybersecurity you won’t find elsewhere.

Mikko Hypponen is a global security expert widely consulted by the mainstream media (think NYT, Wired, BBC). PC World magazine reckoned him in the top 50 leading experts on the web. Keep up-to-speed with what’s going on in the wider cybersecurity world by following @mikko.

Anton Chuvakin is a thought-leader who first coined the term EDR and is an expert on enterprise level security orchestration, automation and response (SOAR) and PCI compliance. He is at the forefront of research into modern network threat detection and response. If your interests are in enterprise security, @anton_chuvakin is an account not to be missed.

Lenny Zeltser does just about everything from incident response and malware analysis to product management and business growth for security products. Lenny also likes to share his knowledge of the wide variety of skills he’s mastered through his blog and his work with the Sans Institute. @lennyzeltser is an essential cybersecurity account to follow, especially for those just getting into the field.

Dan Goodin is a journalist for Ars Technica with a focus on cybersecurity news. Whether it’s malware, computer espionage, botnets or hardware hacking, Dan has it covered. He is often the most reliable source for breaking cybercrime stories and his Twitter account is a great source of information, insight and details behind the headlines. If you want to keep up with the latest news, @dangoodin001 needs to be in your feed.

In her own words, Katie “was a hacker who founded 2 vuln research teams, wrote disclosure policies for Symantec & Microsoft, coached MS & DoD into their 1st bug bounties, & coauthored the ISO standards on vuln coordination & disclosure.” In other words, if you have vulnerability disclosures and bug bounties in your sights, following @k8em0 should be high on your priority list.

If you’ve ever heard of cryptography, then you already know the name Bruce Schneier. What you might not know is that Bruce is a prolific blogger about all things cybersecurity. As special advisor to IBM Security and a board member of the Electric Frontier Foundation (EFF), if it’s security and it’s happening now, you’ll likely find Bruce is on it. @schneierblog is a constant feed of links to his daily security blog and news bulletins. A great account to follow to ensure you don’t miss a thing.

If the name Kevin Mitnick sounds familiar, that’s no surprise. The subject of at least two books, a fictionalized movie and a couple of documentaries, Mitnick’s pursuit and capture by the FBI in the 1990s for computer hacking generated enormous press coverage, and controversy. Now Chief Hacking Officer at KnowBe4, @kevinmitnick tweets about his hacking and public speaking events, with a focus on phishing and social engineering skills.

As the creator of @haveIbeenpwned, Troy Hunt is widely-known as the internet’s password security guru. He also happens to be Microsoft Regional Director and MVP for Developer Security. If you’re interested in staying up to date with the latest in web security and need to keep an eye on the details of new data breaches, @troyhunt is the one to follow.

Graham is an independent blogger, podcaster, and public speaker on computer security issues. His tech bio includes work for Sophos and McAfee and he was instrumental in writing an early AntiVirus toolkit for Windows in the 1990s. These days, @gcluley covers a wide-range of cybersecurity news from both his blog and his regular “Smashing Security” podcast.

Ever wanted to learn how to reverse engineer Windows malware? Well, Ophir Harpaz has you covered with an interactive online tutorial website, begin.re. Her Twitter feed is full of useful snippets of code, links to technical analyses and threat intelligence news. @OphirHarpaz is a great source of insight and experience from the front line of cybersecurity research.

Omri Segev Moyal is co-founder and research director at Minerva Labs. He also created and runs the Malware Research Slack Group, a community where malware researchers can exchange intel, ask questions and learn from each other. Omri is at the forefront of malware analysis and reverse engineering and @GelosSnake is a great account to follow for latest IoCs, malware outbreaks and new exploits.

Florian is a redteamer, pentester and exploit hunter, as well prolific tweeter and blogger. @HanseSecure is one of the best sources for tweets and retweets of technical write-ups, links to scripts, plug-ins, exploit kits and other new tools, along with how-to’s and tips for anyone interested in redteaming and pentesting.

Costin Raiu describes himself as a “Romanian antihacker from another planet”, but it seems while Costin is visiting Earth, he also happens to be director of Global Research and Analysis at Kaspersky. As such, @craiu is a superb source of intel ranging from new 0day discoveries to retweets from “the best of the rest” covering breaking news in threat intelligence.

Esteban Rodriguez’s Twitter feed and blog provide some fantastic technical resources if you’re looking to learn about penetration testing and redteaming. Just as importantly, @n00py1 has got his ear to the ground and is a rapid and reliable retweeter of all things InfoSec. Definitely a feed to watch to keep up with the latest hacks, cracks and attacks.

And now for something completely different…or for what you probably won’t find in any of the other Twitter feeds in our list: an expert on iOS and macOS forensic analysis and incident response. Sarah’s twitter account @iamevltwin and her blog are the place to go for those interested in all things deeply technical related to Apple’s operating systems.

We didn’t find a publicly revealed name for Polish malware researcher @hasherezade, so we’ll stay mum on that, too! Don’t let that stop you from following her on Twitter or on her blog. @hasherezade says she “unpacks malware with as much joy as a kid unpacking candies”, and when you see the collection of free tools she’s sharing on github, that comes across as pretty evident. Keep @hasherezade in your feed for in-depth technical breakdowns of the latest malware.

If it’s the dark web you’re interested in, then the one account you can’t afford to miss is Justin Seitz’s. Justin is a coding teacher and OSINT trainer. He’s also the creator of Hunchly, an investigative tool used by, among others, dark web investigators. @jms_dot_py has daily links to Hunchly’s Dark Web Report that shows newly-discovered Tor hidden services as well as a historical list of active hidden services. 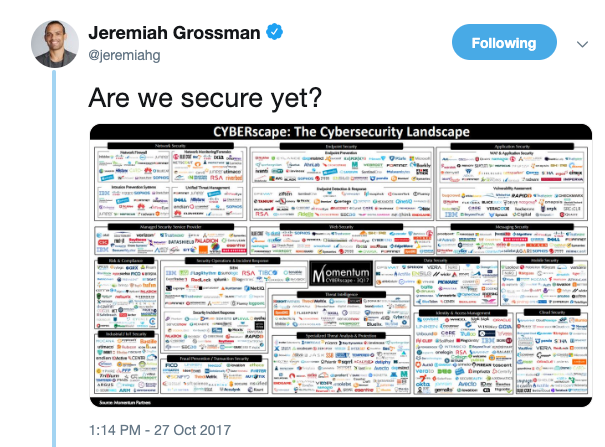 When Jeremiah joined SentinelOne nearly two years ago as our Chief of Security Strategy, it was at a pivotal point in our maturation. His contributions have been instrumental in driving us forward. Today, he is still with us as a strategic advisor in our next phase of growth. @jeremiahg shares insights about the cybersecurity landscape and has been advocating cyber insurance for several years now. 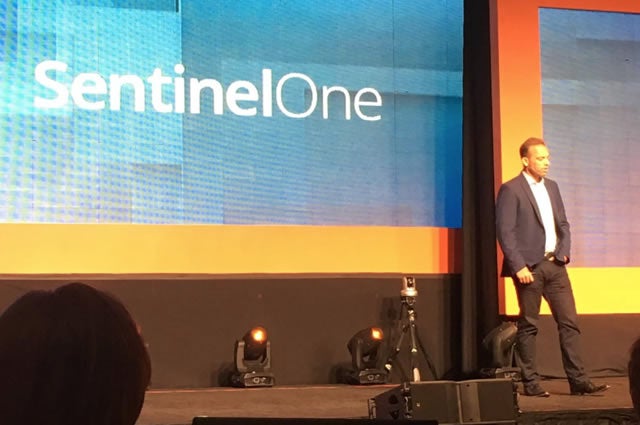 OK, so we weren’t able to include everyone’s favorite cybersecurity Twitter star (or even many of our own!), but we did provide a wide-ranging list of folks to follow who between them will connect you to all the far corners of the cybersecurity twitterverse. Of course, we’d be remiss not to mention that you can keep up with all our news on Twitter, too, by following @SentinelOne.