The Good, the Bad and the Ugly in Cybersecurity - Week 1 - SentinelOne

The Good, the Bad and the Ugly in Cybersecurity – Week 1

It’s been a busy start to the new year for privacy regulators, who have hit both Meta (aka Facebook) and Apple with new fines.

Apple has been given an $8 million penalty by France’s CNIL for failing to obtain consent from iOS 14.6 users relating to identifiers used to present targeted ads. Meta, which had just received a fine of $170 million from the CNIL a few weeks ago, now faces a further whopping $410 million (€390 million) fine from Ireland’s Data Protection Commission (DPC).

In better news for Meta and users of the company’s WhatsApp instant messaging service, this week saw WhatsApp roll out support for proxy servers. This allows users to connect to each other and maintain end-to-end encrypted chats even if authorities block WhatsApp’s own servers, as Iranian authorities did back in September in the wake of civil unrest.

No sooner had we noted that supply chain attacks via public code repositories were likely to be an increasingly common feature of the 2023 threat landscape than a threat actor ran a dependency confusion attack against the PyTorch package on PyPI.

Dependency confusion attacks are different from the more common typosquatting attacks that we’ve seen used against shared repos recently like CrateDepression and pymafka. The technique takes advantage of the fact that some packages have dependencies that are hosted on private servers. However, by default, package managers that handle a client’s request for dependencies search the public code registry first for instances of the dependency. That means if the dependency package’s name is available on the public registry, an attacker can upload a malicious package to the registry and essentially intercept the dependency request from the client when users build it on their local machines.

An individual, who subsequently claimed to be a ‘researcher’, uploaded a malicious public version of the privately-hosted torchtriton package used by PyTorch. Users that built PyTorch between December 25th and December 30th received the fake torchtriton dependency. The malware was almost identical to the legitimate torchtriton save for the addition of a malicious binary at ./triton/runtime/triton  and code to ensure that it was executed. The triton executable collects and exfiltrates a variety of sensitive data from the victim’s machine to a remote URL including:

The malicious package has since been removed and replaced with a stub to prevent further attempts at exploiting the same trick. However, dependency confusion attacks are possible wherever private packages do not claim the same namespace in the public repository. Aside from PyPI, packages hosted on NPM and YARL are also known to be vulnerable to dependency confusion attacks. 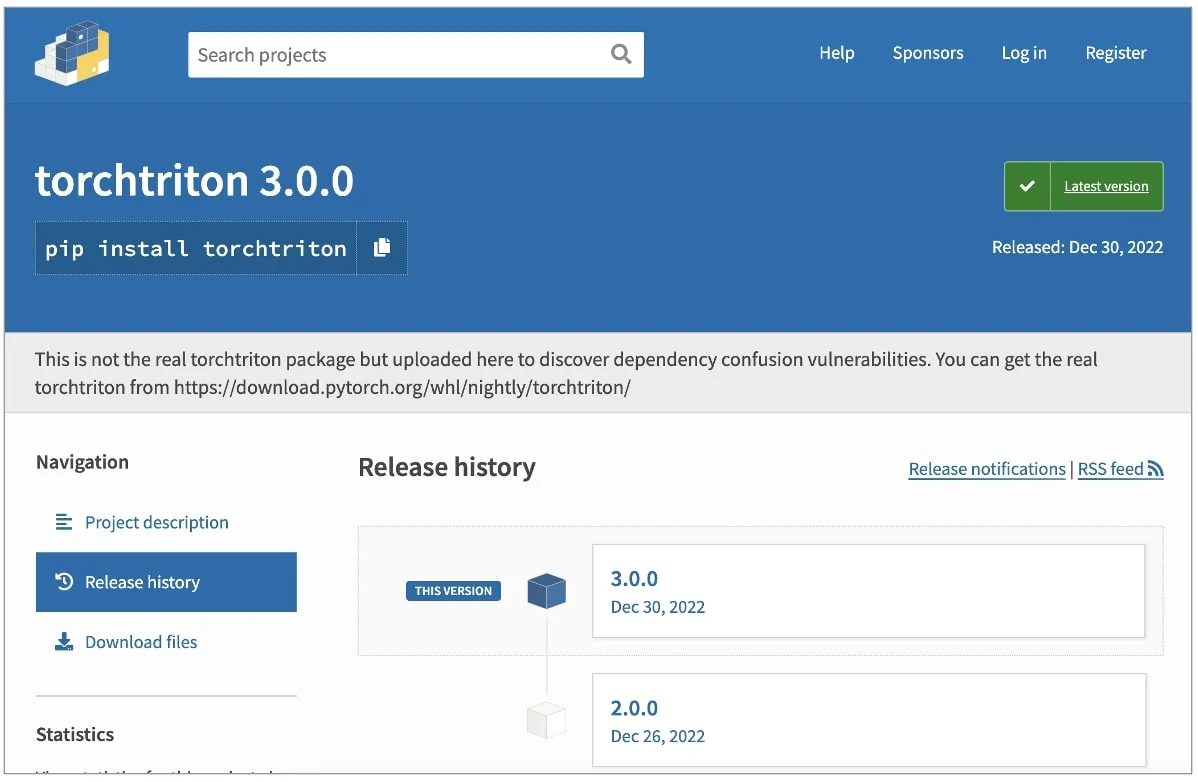 It’s estimated that there were around 2300 malicious downloads during the time the malware was hosted on PyPI and PyTorch users are urged to uninstall and download the latest version if they think they might be affected. It is also recommended that credentials or keys stored in any of the locations noted above be rotated or reset.

Victims receive an email with a malicious attachment. When double-clicked, the attachment mounts an ISO file containing a legitimate copy of WerFault.exe and a malicious version of a dependency, faultrep.dll. When users click the shortcut LNK file “recent inventory& our specialties.lnk” located in the mounted drive, it launches WerFault.exe, which in turn looks for and loads the DLL dependency located in the same directory.

The doctored DLL presents the user with a decoy XLS spreadsheet while in the background it loads an encrypted Pupy RAT payload into memory.

Pupy is an open-source, cross-platform attack framework with payloads that work on Windows, Linux, Android and macOS. Its capabilities include the ability to open a backdoor, execute arbitrary code and execute further payloads.

It is not immediately clear who is behind the campaign, but based on the XLS lure targets appear to be Chinese-speaking users. Sideloading DLLs via legitimate Microsoft software continues to be an issue defenders need to take seriously: Last year, Microsoft security tool Windows Defender was found being used to sideload Cobalt Strike during LockBit ransomware incidents.