From the Front Lines | Slam! Anatomy of a Publicly-Available Ransomware Builder - SentinelOne 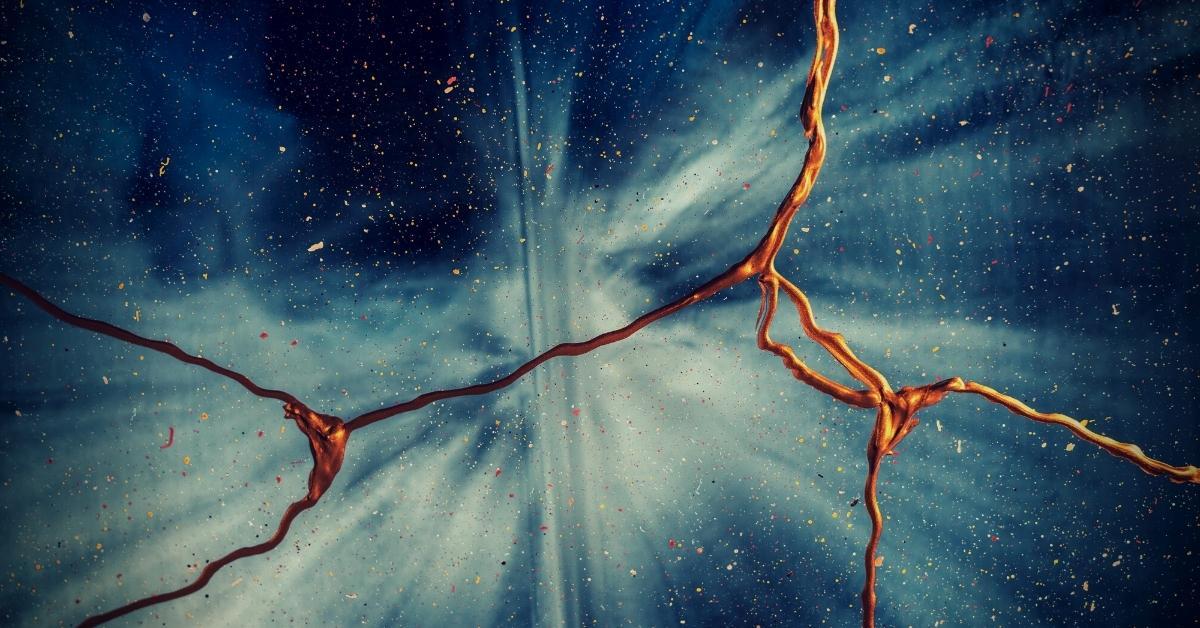 From the Front Lines | Slam! Anatomy of a Publicly-Available Ransomware Builder

The barrier to entry for enterprising cybercriminals has been dropping considerably over recent years, in part due to the availability of RaaS (Ransomware as a Service) offerings on the darknet but also due to publicly-accessible code being shared for free. One such offering is the Slam Ransomware Builder, which had been hosted until recently on Github. In this post, we highlight how free ransomware builders like Slam offer an easy route into cybercrime and yet present a credible threat to organizations and enterprises. We provide a detailed list of indicators to help security teams detect and protect against Slam ransomware payloads. 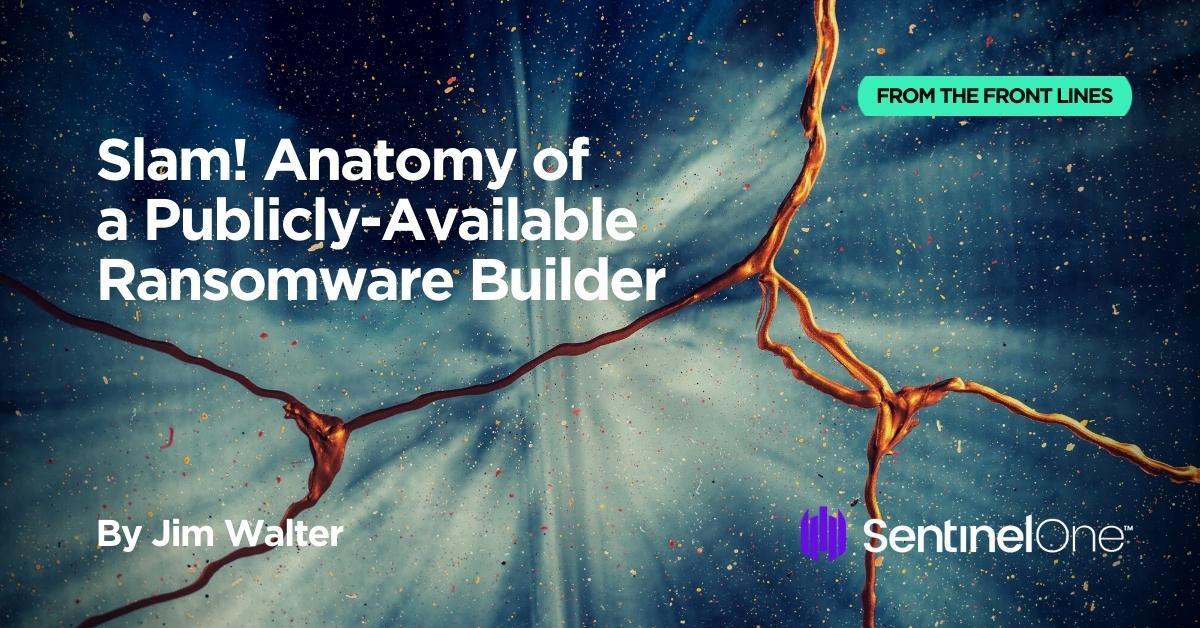 Ransomware For “Educational Purposes Only”?

The Slam Ransomware Builder first appeared in late 2021, with Slam ransomware payloads appearing in the wild shortly after (e.g., ConsoleApp2.exe). During mid-2022, downloadable and executable versions of the Slam Ransomware Builder appeared on a publicly-visible repository on Github and were available for several months until Github admins removed the repository on September 1st, 2022.

The owner of the now-removed repository dubbed it “The Most Advanced Free Ransomware Builder” and has a history of providing “educational” videos on Vimeo, Youtube and KZHome, instructing viewers how to build ransomware and “virus payloads”.

While the author’s public postings contain the usual “for educational purposes only” and “don’t try this” disclaimers to avoid responsibility, they also contain language such as “most advanced ransomware” and “damage rate: destructive”.

The author had described the ransomware’s behavior in detail in earlier publicly-posted videos, describing how victim data could be exfiltrated to an attacker-controlled site. 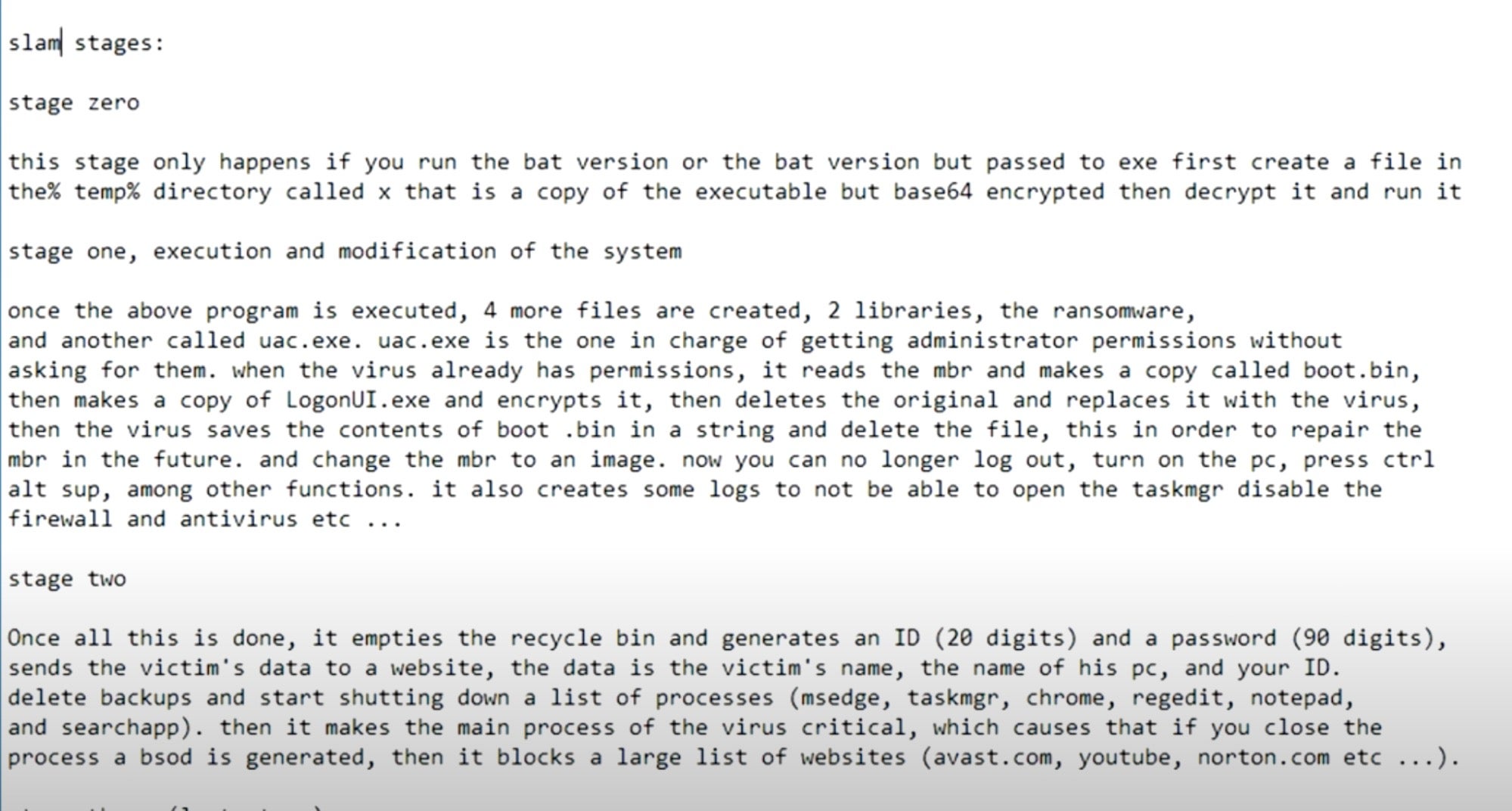 The author’s reasons for distributing free ransomware builders can only be guessed at, but despite being free, the builder and payloads are genuine threats that can cause real damage. As our analysis below shows, Slam is a full-featured ransomware with AES256 encryption, UAC bypass, shadow backup copy deletion and data exfiltration capabilities. In other words, everything needed to lock and steal enterprise data.

The most recent release of the Slam ransomware builder prior to being removed from Github was version 1.7. Earlier versions of the tool supported either English or Spanish locales, while later versions including 1.7 allow toggling between the two.

Despite the code being removed from Github, it is possible the author intends to find or already has other distribution outlets. A list of features promised for the future include screen locking, MBR overwrites, and “LogonUI overwriting”.

Upon running the code provided on Github, users of the builder are presented with a menu leading to different builder components or indications of their upcoming release.

When choosing the “slam ransomware builder” option, users must first “Install”, then “Start” to launch the builder interface. This installation essentially consists of writing the builder EXE to c:\slam_ransomware_builder\. Any other component requiring an “Install” step will also go to the root of the C drive (e.g., c:\slam_mbr_builder)

Once the main interface is launched, the user is presented with a standard set of options for building their ransomware payloads. 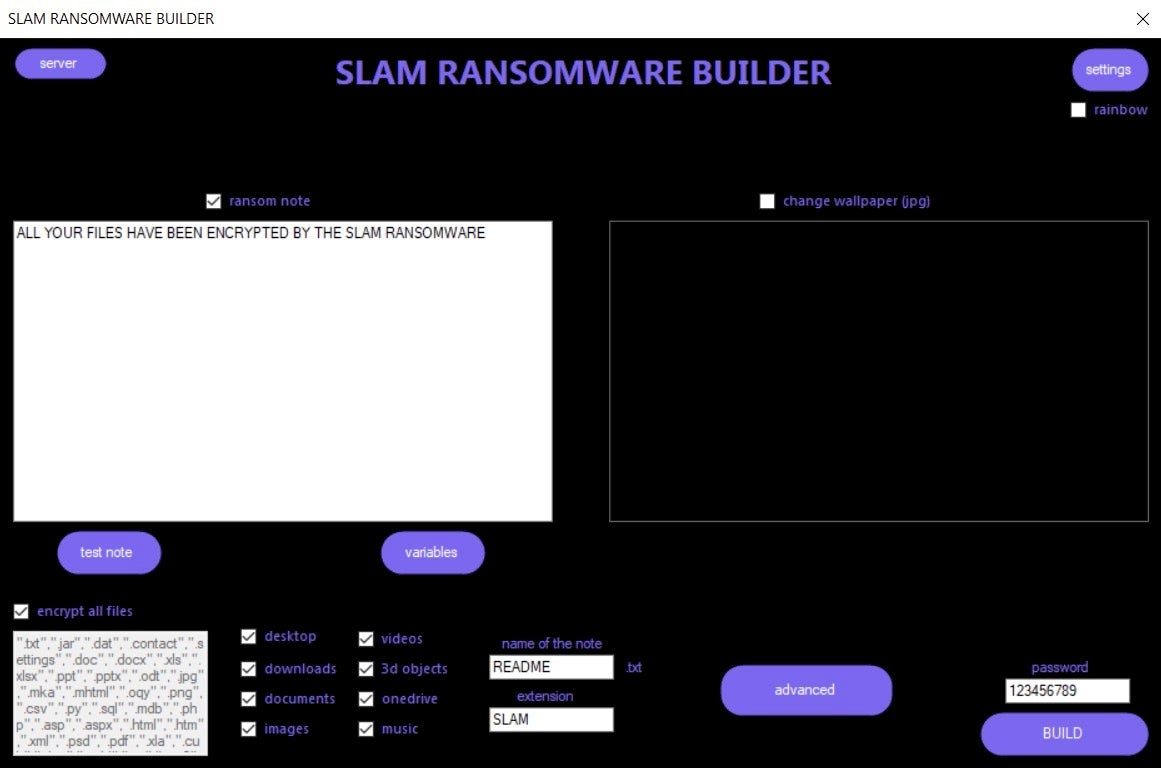 Options including the following are present in this interface:

The tool provides more ‘Advanced’ configuration options as well. These options are accessible via the “advanced” button. 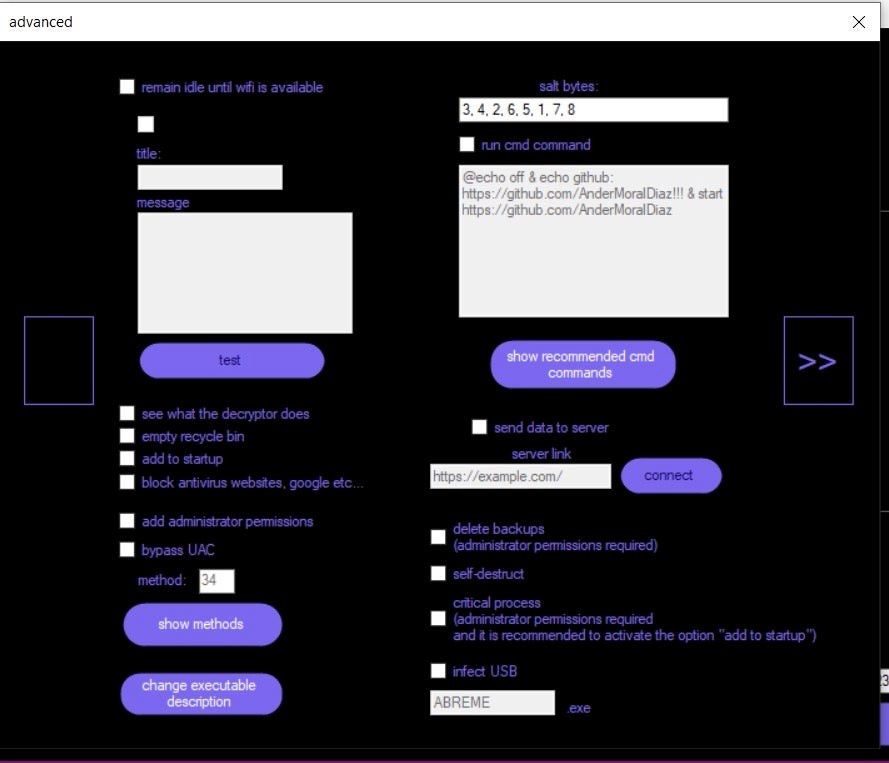 Options in this section include:

The “block antivirus websites” option is meant to inhibit the victims from being able to download security software or check suspicious files on public malware repository sites such as VirusTotal.

The ransomware achieves this by modifying the device’s Hosts file, adding a long list of sites belonging to the likes of Avast, Avira, Bitdefender, CCleaner, Google, Kaspersky, McAfee, Microsoft, Panda Security, Trend Micro, VirusTotal, YouTube, and others. Each site is simply bound to the machine’s loopback address (typically, 127.0.0.1), preventing the domain name from being resolved to an external IP address.

With regard to bypasses, the version of Slam we analyzed includes a single UAC bypass, based on UACMe, which attempts to defeat Windows User Account Control by abusing the built-in Windows AutoElevate backdoor. UACMe is a bypass technique that has been known for some years and widely abused by a number of other malware families including Multiplug adware, Dyre, Empercrypt and IcedID.

To exfiltrate victim data, the user can specify an HTTP server in the configuration interface, where a connection test can also be performed. If the connection test fails, an error is displayed. Other options available to the user include USB infection and execution of custom commands when the payload is detonated on the victim machine.

With all options configured, the executable payloads generated are standard EXE files. The builder outputs both the encryptor and decryptor tools.

When executed with non-Administrator privileges, the UAC prompts and/or configured bypasses will come into play.

Post-execution, the victim device is encrypted according to the options configured in the builder. 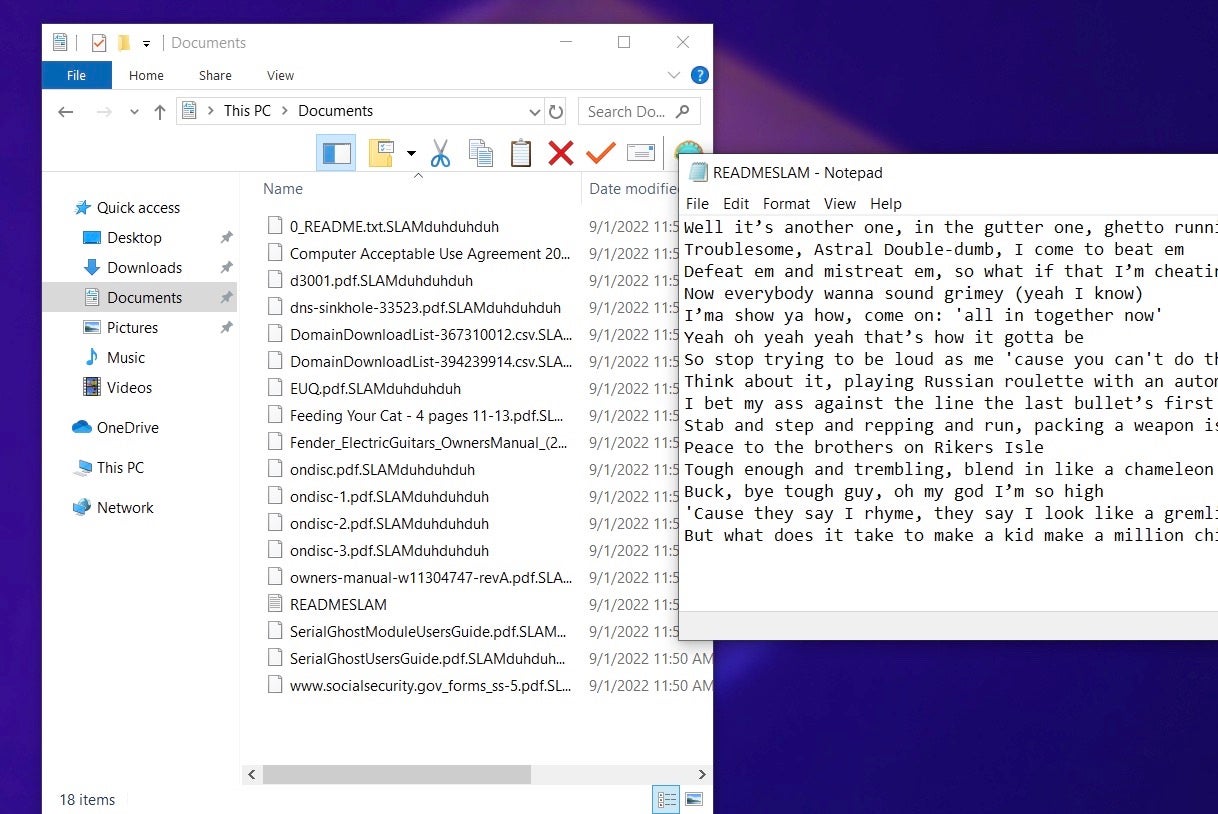 The payload is written to %AppData%\Local\discord.exe, which is called in the registry (Run key), ensuring the ransomware payload is persistent.

As advertised, the Slam payload successfully inhibits recovery via removal of VSS backups on an unprotected machine. Both wmic and vssadmin methods are utilized for VSS deletion.

The Slam builder also contains a very early stage “Alpha” MBR builder tool. Choosing to “Install” should write start.exe to c:\slam_mbr_builder\start.exe. This does not appear to occur in our testing and analysis, and the feature appears to be non-functional in the version of the Slam Builder we analyzed from Github.

However, we were able to obtain a copy of the builder from another source that allowed us to launch the builder and observe the output.

Within the MBR Builder interface, users are able to configure the message displayed to the victim.

Prior to executing the build, a final screen allows the attacker to choose the “reboot mode” with the options being

Payloads from the MBR builder have been observed in the wild with the following PDB string.

In this area and many others of infosec, there is a fine line between “education” and researcher-led offensive security that seeks to explore and improve weaknesses in enterprise defenses on the one hand, and simple, out-and-out malicious code designed to aid and abet criminal offenses on the other. We see no indications in the various public artifacts around the Slam ransomware builder (code, videos, Github repository) that suggest it could reasonably be interpreted as in the service of the former.

However that may be, once in the hands of unscrupulous actors, full-featured projects such as these represent a real risk to enterprises and organizations.

We applaud Github for removing this code and hope this post serves as a reminder to defenders to be vigilant as threat actors continue to simplify the ransomware-centric extortion process. The barrier to entry into the world of cybercrime has never been lower.