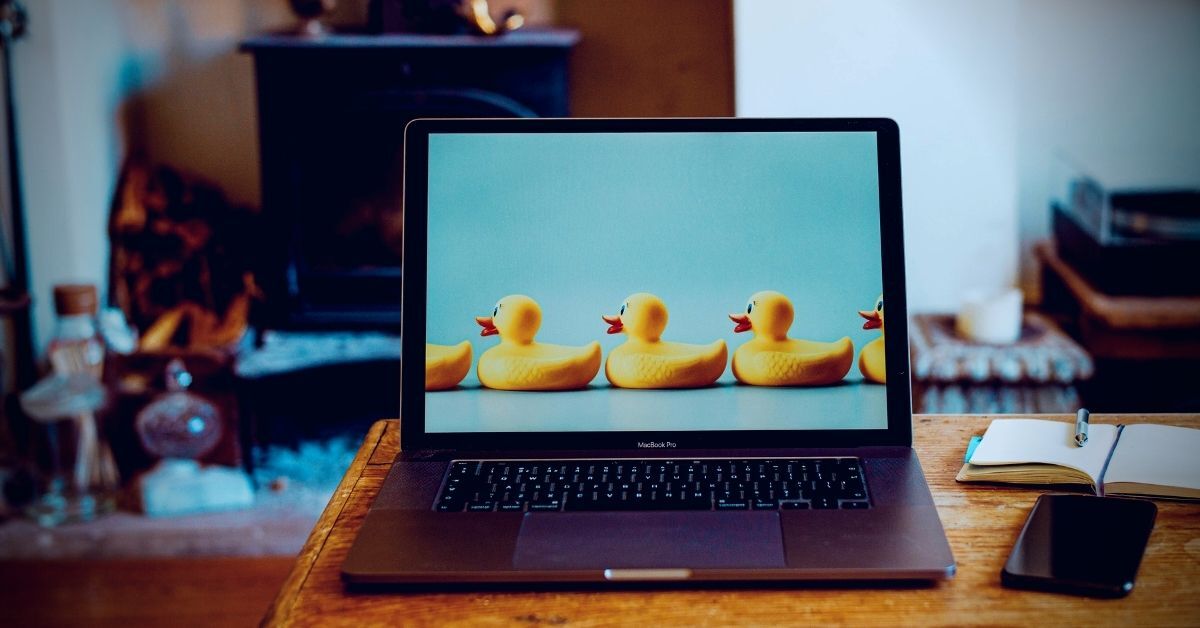 At the beginning of the year, Kaspersky reported new details of an ongoing campaign they called ‘AppleJeus’, attributed to North Korean-backed APT group Lazarus and first spotted in 2018. Kaspersky noted that as of January 2020, the Lazarus group was “currently one of the most active and prolific APT actors”. Since January, other reports have detailed a macOS RAT (DaclsRAT) and linked it to a wider Lazarus cross-platform toolset (MATA framework). Since late May 2020, we have observed three other distinct families of macOS malware likely from the same actors, most of which have not yet been publicly documented. In this post, we provide a high-level overview of all four of these macOS malware families and detail their variants and evolution so far. The first of these four families has been covered by other researchers in detail; here we will just summarize the main findings for completeness.

First seen on 8th April on VirusTotal, the so-called DaclsRAT malware was distributed as a trojanized “One-time-password” (OTP) app called TinkaOTP. The malware embeds a copy of the open-source MinaOTP project as cover for its malicious activities.

Written in Swift, the initial observed sample was built on a macOS 10.15.3 (19D76) machine, while a second version, compiled the following week on April 1st was built on 10.15.4 (19E266), indicating if nothing else that the malware authors were vigilant at keeping up with macOS updates on their own machines, whether virtual or metal-based.

As has been previously reported, there are two variants of the trojan TinkaOTP. The version that has received the most attention contains the malware payload in the application bundle’s Resources folder. The file is a Mach-O binary disguised as a .nib file, at ../Resources/Base.lproj/Submenu.nib. This file is copied directly to the users Library folder and renamed as .mina. The dot prefix is added in order to make it invisible in the Finder. This payload is then executed via a user LaunchAgent at ~/Library/LaunchAgents/com.aex-loop.agent.plist.

The second version does not carry the payload directly but instead downloads it from a C2 into the same location as before. The C2 server address is embedded in the main executable in the TinkaOTP bundle. The hardcoded download and execution code are easily visible as they are unencrypted, plain UTF strings in the binary:

The .mina Mach-O payload itself contains a number of interesting UTF-16 strings that both indicate its purpose and its C2s.

The payload’s main() function is fairly succinct and hardcodes both the paths and contents for a LaunchAgent and LaunchDaemon to achieve persistence:

In an update last week, researchers suggested that the malware contained in the trojanized OTP app was in fact part of a larger toolkit they named ‘MATA’. Since extensive details of this have already been published, we refer interested readers to the earlier work.

The second family of Lazarus malware appearing in recent months has, as far as we are aware, received little to no analysis from researchers, possibly due to its targeted nature and a lack of ITW sightings.

Trojanizing cryptocurrency-related apps is where the AppleJeus story began in 2018, and it seems the group must have met with reasonable success as 2020 has seen at least two new attempts, with CoinGoTrade and Cryptoistic.

We were first alerted to CoinGoTrade via a tweet on June 3rd from researcher @ccxsaber. A domain at coingotrade.com was set up to lure victims into downloading a fake cryptocurrency app. Although we were not able to source the app bundle, further investigation on VirusTotal revealed two samples of a malicious Mach-O binary that appear to have been the loader:

These two samples are both written in Objective-C rather than Swift, and appear identical save for a single line in the main() function, as shown by the following diff:

The hardcoded value of 0x4c4b40 is the number of seconds passed to the usleep function and equates to 5 seconds (5000000 microseconds). Given no other changes in the code between the two samples, it can be supposed that the second sample, which appeared on VirusTotal 14 days after the first, may have been released as a correction to the first. The cslp() function also causes the code to pause execution for short intervals, so it may be that the authors decided the call to usleep was redundant or somehow not producing the results they desired.

The samples embed calls to the following URL:

Unfortunately, we were not able to retrieve a sample of the payload executed out of /private/tmp/updatecoingotrade. However, clues to its likely behaviour may perhaps be found in a second trojanized cryptotrading app appearing on VirusTotal in early May 2020, called “Cryptoistic”. 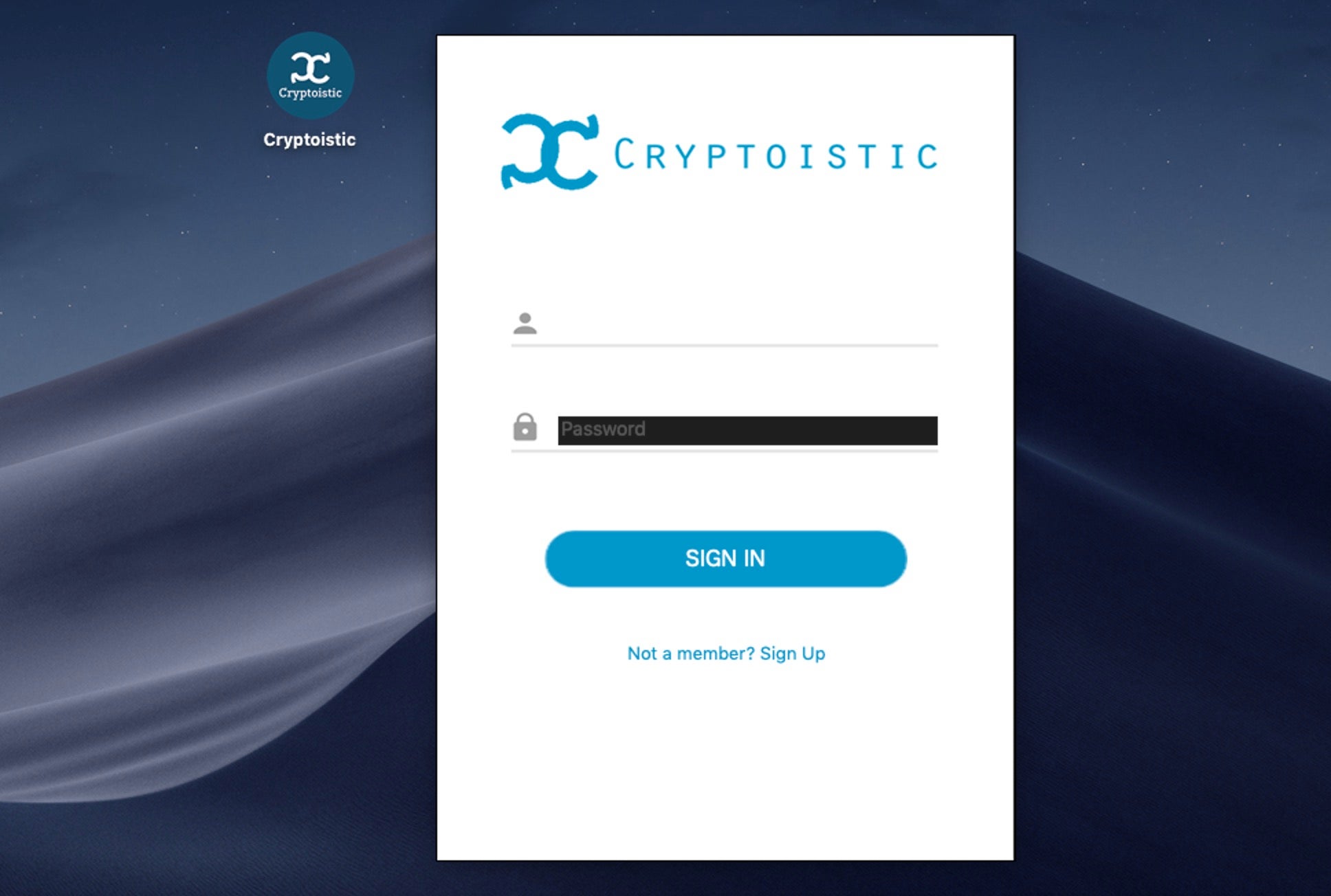 Unlike the CoinGoTrade trojan, Cryptoistic is written in Swift, although it contains a great deal of code bridged to Objective C, perhaps indicating a developer more familiar with the older programming language. Cryptoistic was compiled on April 2nd, a day after the second version of TinkaOTP, but on a Mac device (real or virtual machine) running an older version of macOS than the one used for compiling the trojanized OTP apps: in this case, 10.15.2 (19C57).

Apple’s 19C57 release build had already been superseded several months earlier at the end of January, so at least here the threat actor’s build machine was not being kept up to date.

The main purpose of Cryptoistic appears to be to entrap users into creating a single account with the fake platform from which to manage multiple accounts on legitimate platforms such as kraken.com, huobi.por, and binance.com.

But perhaps most interesting of all is the hardcoded URL, "http://applepkg.com/product/new/iContact.pkg", which despite the .pkg suffix, in fact returns a Mach-O payload and drops it at /tmp/.signal_tmp.

The iContact binary appears to be a backdoor that gathers user and locale data and engages in encrypted communications with a C2 server over TCP. Functionality includes sending and receiving files and running custom commands such as scanning a directory and deleting files. 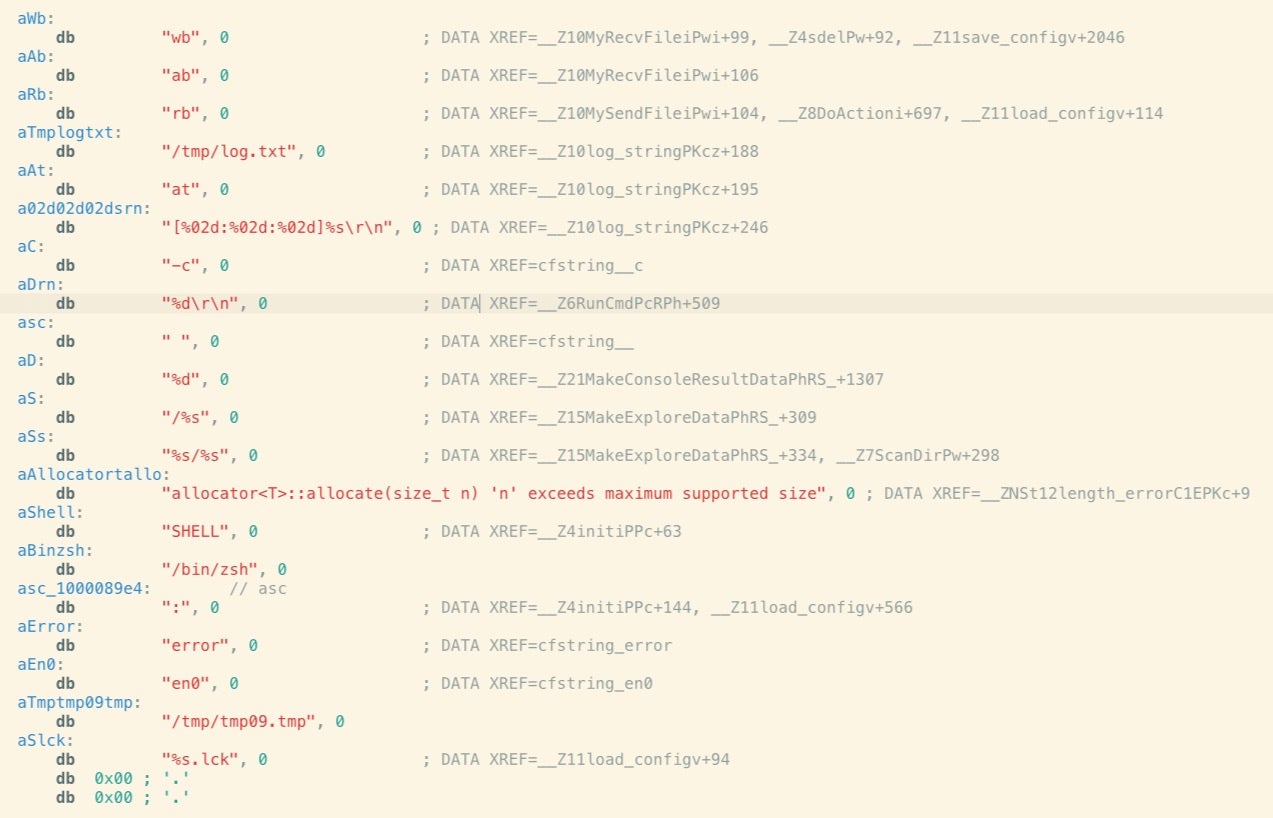 At the same time as TinkaOTP, CoinGoTrade and Cryptoistic began circulating, so too did a family of lightweight, backdoor binaries, written primarily in Objective-C and C and making heavy use of standard C libraries built in to the operating system. For convenience, we call these closely-related variants OSX.Casso (the reason will become clear shortly).

The first of these appeared on VirusTotal on June 1st with the file name “osxari”.

The last of these was uploaded with the filename “cassoosx”. A quick search revealed that there is also a Windows variant cassou.exe (hence the name OSX.Casso):

What makes these macOS samples all of a piece can be seen from a diff of their Symbol tables, which are almost identical across the range of samples and include heavy use of the built-in libcurl.4.dylib. 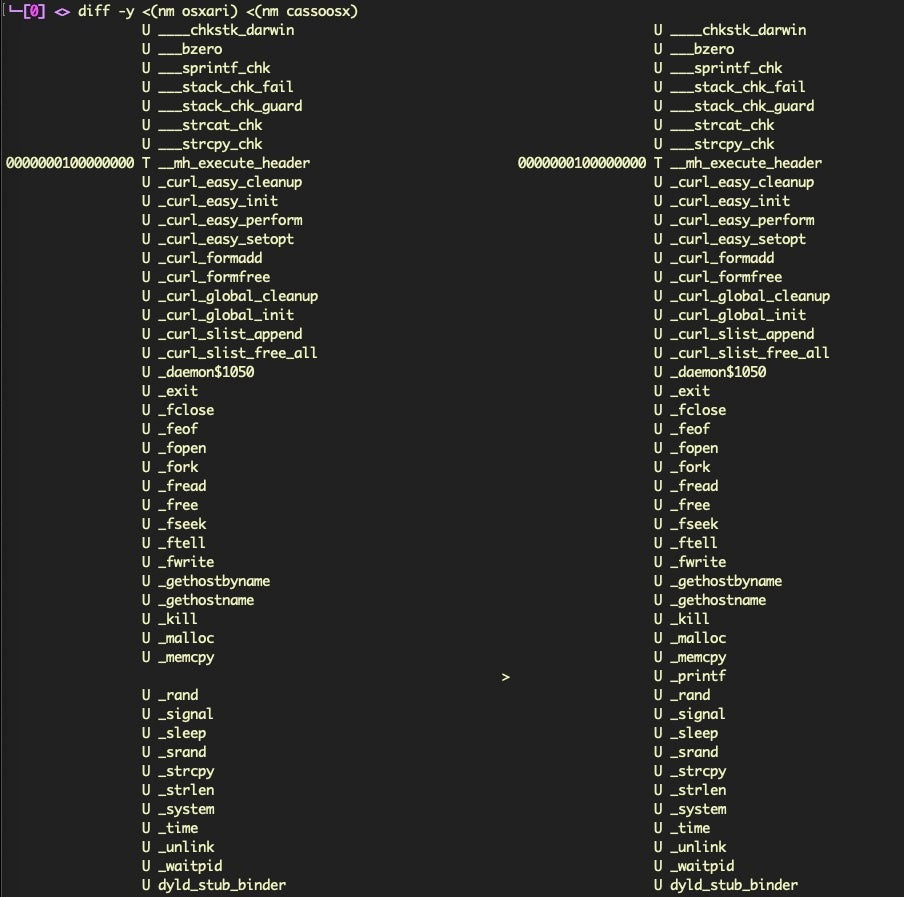 A diff of the embedded strings also reveals some of the significant differences between the first and most recent of OSX.Casso samples:

The samples are almost identical except that “cassoosx” includes a reverse shell and different C2 domains. All of the samples except cassoosx are around 32Kb in size, but cassoosx has also been padded with several megabytes of junk printf calls, quite possibly to beat YARA rules that specify a max file size, such as those seen in the Apple’s static signature scanner XProtect.

Here we see the XProtect YARA rule for OSX.Casso:

Although the rule's single $s1 condition will hit on the cassoosx sample, the detection will fail as the binary size is well over the maximum 100Kb specified in the condition thanks to the padding:

A further change across OSX.Casso samples can be seen in the hardcoded User Agent strings and the version of Chrome that they denote, with the osxari User Agent encoded as follows:

and all later samples including cassoosx updated to Chrome 83:

The osxari backdoor is itself an evolution of an older Lazarus-related executable 'Flash Player' distributed in the malicous Album.app. Here we see the same basic methods and use of libcurl in Album.app's executable, 'Flash Player', but there's been a few revisions in the 2020 code:

After osxari, all later samples of OSX.Casso begin to include the reverse shell. Unlike the older Flash Player sample, none include a hardcoded persistence LaunchAgent or LaunchDaemon.

As this post was in preparation, an update to Apple's XProtect signatures late last week revealed yet another Lazarus group Mach-O that differs significantly from those discussed above.

Two new rules in XProtect identify yet another User Agent string, this time specifying older versions of both macOS and Safari:

The rules also specify strings for "MediaRemote.app" and "com.apple.watchcat.plist". Searches on VirusTotal have only revealed one sample so far:

Detections have been increasing rapidly over the last 14 days as signature-based solutions have caught up: 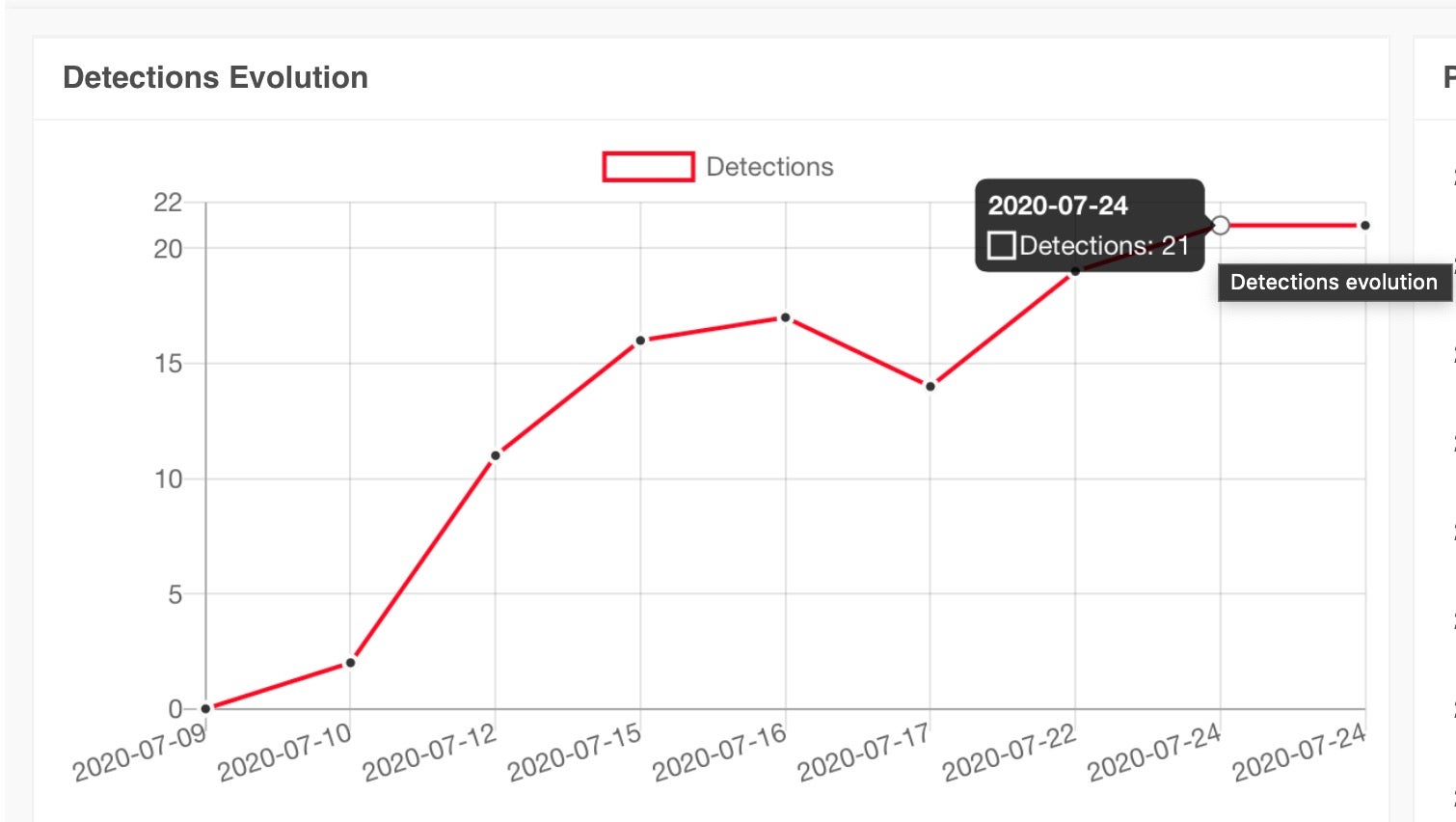 Although there are some overlaps with the earlier backdoor samples (e.g, the use of "/usr/lib/libcurl.4.dylib"), and the trojanized OTP apps (e.g., inclusion of a hardcoded LaunchDaemon), there is also much more to this malware that has not been seen in the other samples, including use of a WebShell and an onboard crc32 table for decrypting a config file. 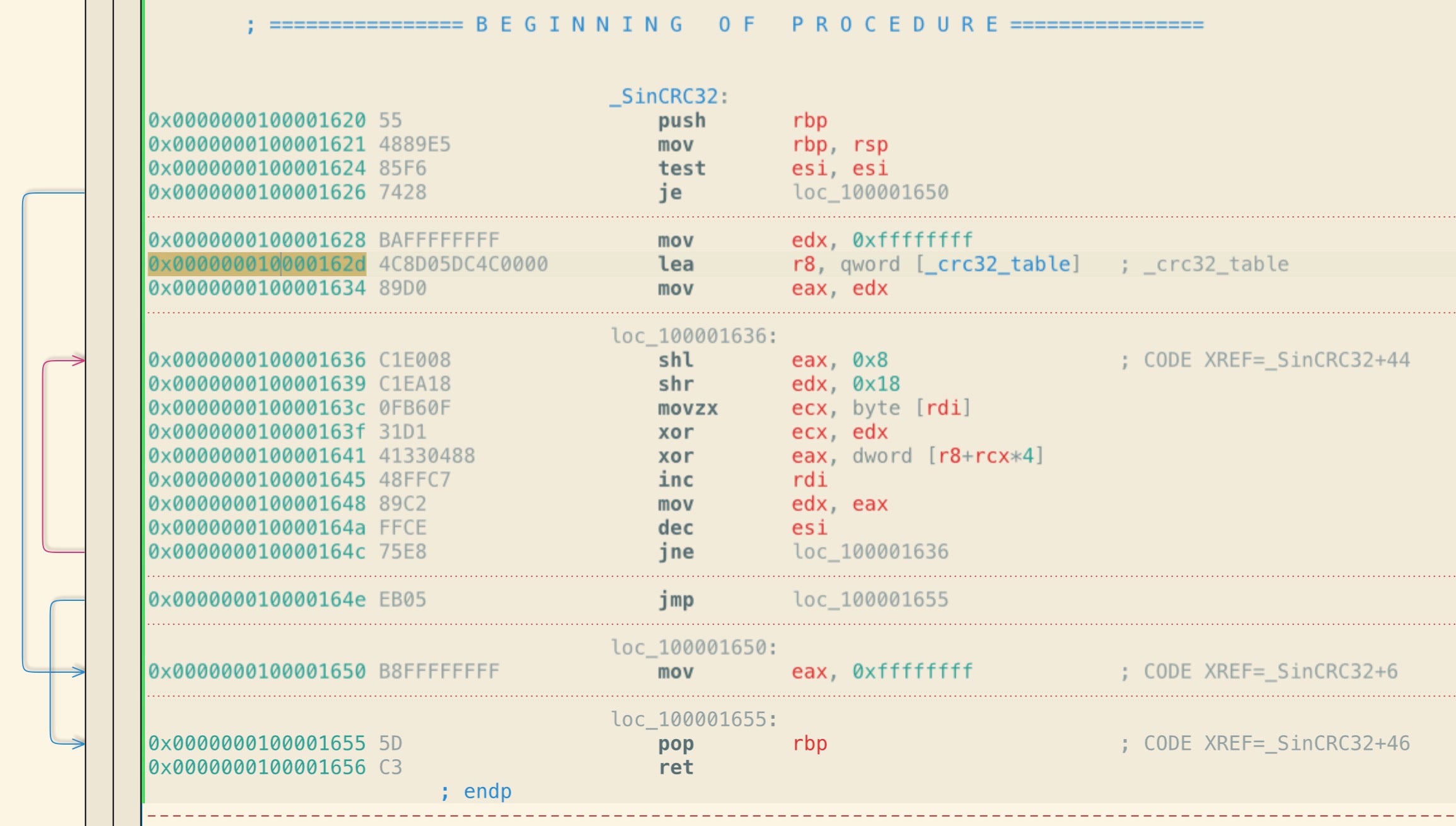 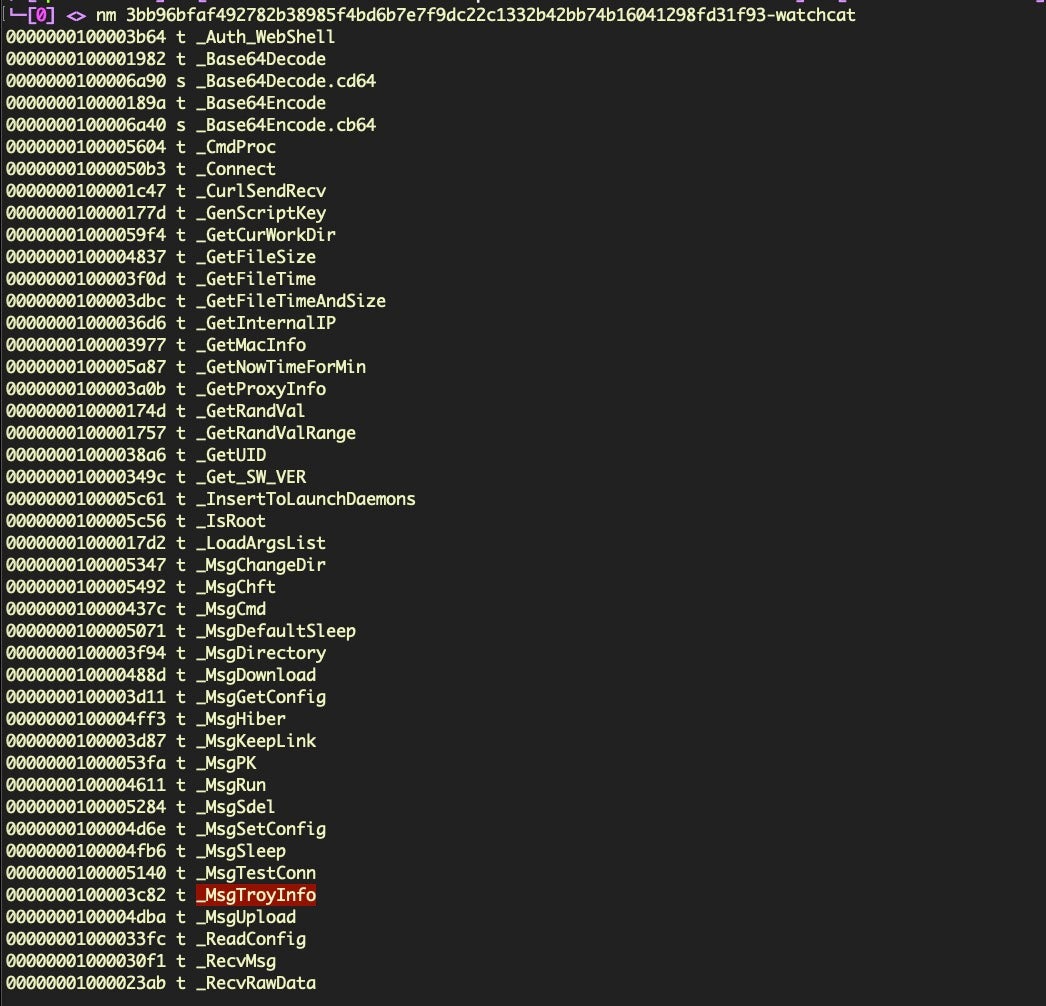 While analysis of watchcat is still ongoing and we have yet to see an in-the-wild infection, it's clear that the rapid iteration of all these various Lazarus-related malware samples shows the actor is heavily invested in the macOS platform.

All of the samples reviewed above have appeared in the last eight to ten weeks and are evidence that threat actors behind the Lazarus group are pursuing several distinct campaigns, using a variety of technologies, and are themselves keeping up-to-date with the Apple platform. These are not actors merely porting Windows malware to macOS, but rather Mac-specific developers deeply invested in writing custom malware for Apple's platform. Primarily, the samples we have reviewed here appear to be designed to steal cryptocurrency and maintain backdoors into their targets' devices, but there is clearly much more to be learned about these campaigns. The SentinelOne Platform protects users against all the samples reviewed in this post. For more information about the SentinelOne macOS agent, see here.