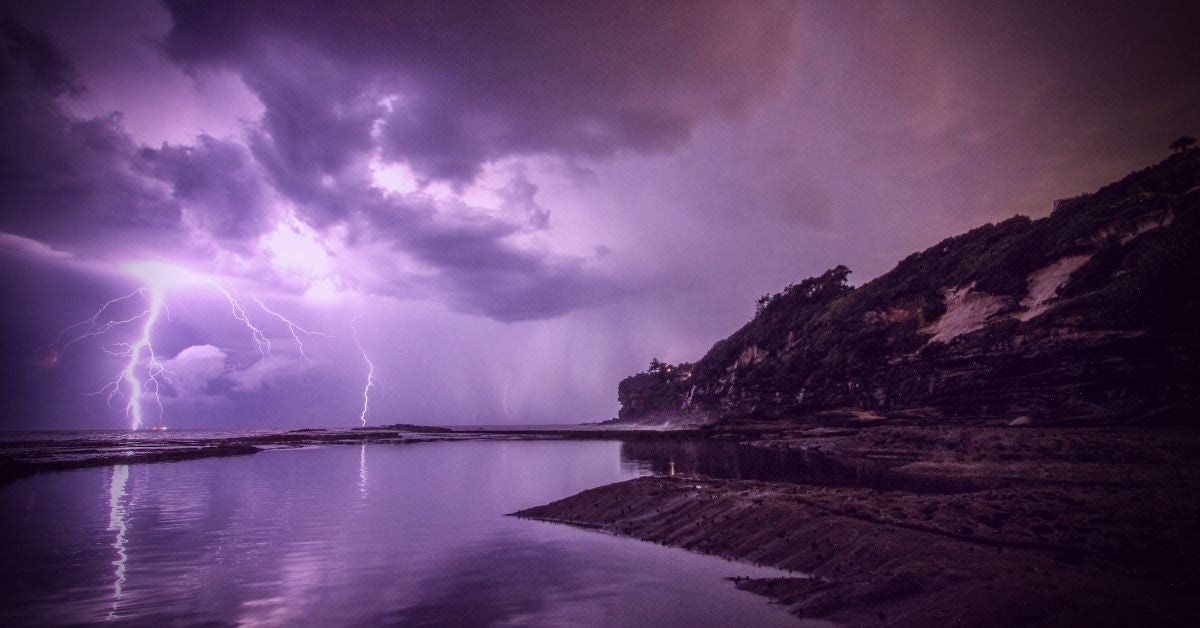 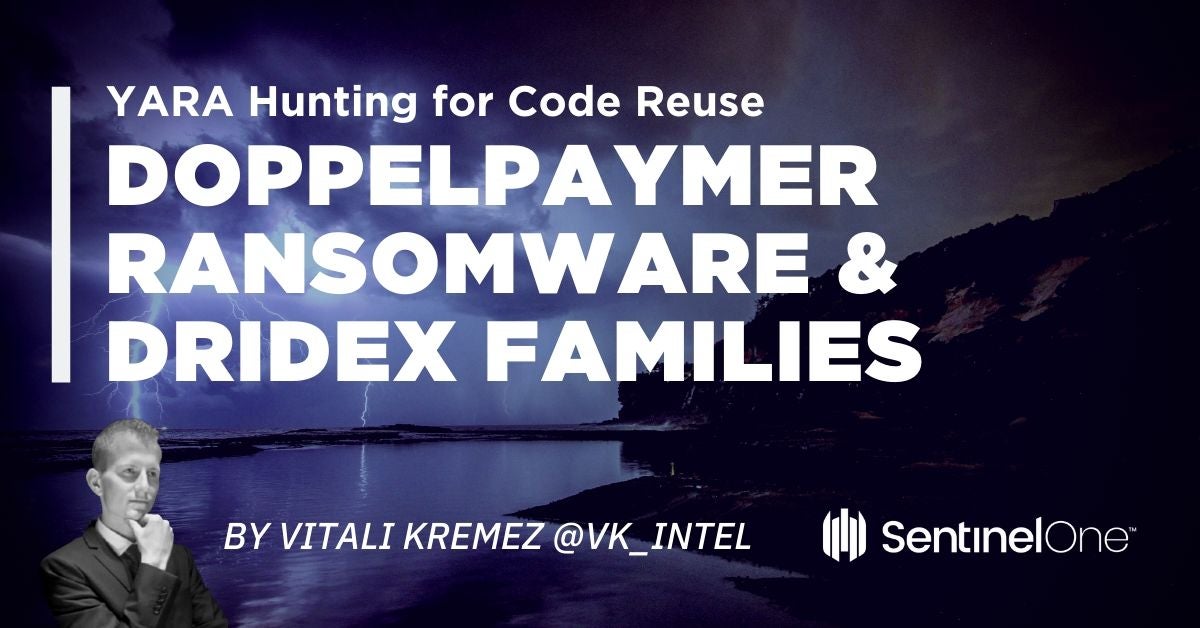 Whenever we discuss how to proactively hunt for malware of interest, whether it be crimeware or APT for threat intelligence purposes, YARA is the true swiss-army knife that makes the work of malware researchers and threat intelligence analysts that much easier.

Malware developers work just like legitimate software developers, aiming to automate their work and reduce the time wasted on repetitive tasks wherever possible. That means they create and reuse code across their malware. This has a pay-off for malware hunters: we can learn how to create search rules to detect this kind of code reuse, reducing our workload, too! In this post, we will we learn how to write YARA rules for the following three crimeware variants belonging to the Dridex family:

In a nutshell, our goal is to hunt for malware software developer code leveraging YARA code reuse rules rather than relying on rules covering easily changeable strings.

One of the primary original purposes of YARA was to classify and identify malware samples. It is a rather simple Ruby-based language syntax used to describe various patterns.

The latest YARA version is 3.11.0. YARA is a signature-based tool with multiple command-line interfaces in various programming languages. In other words, it is similar to static anti-virus signatures used to detect malicious files.

The major functionality of YARA is to scan folders for files and buffers for patterns. Many tools rely on YARA such as yarashop, for example.

Some of the most common uses of YARA for our purposes is to scan, categorize and identify malware samples of interest based on code and string reuse.

The typical YARA syntax example is as follows:

The additional modifiers can be as follows:

global: match before any subsequent rules
private: build other rules
none: match unless global is used

The tags are as follows:

The conditions can be as follows:

There is a difference between writing YARA rules for malware hunting versus detection. In this part of the course, we aim to produce “looser” YARA rules for threat hunting purposes with the higher chance of capturing newer variants and false positives. In other contexts, you may want stricter YARA rules for a specific detection mechanism and malware strain.

By and large, efficient YARA rules are only as good as the data sources used to vet the YARA rules against. Anti-virus and malware researchers rely on large datasets of known good and known bad (and known random) samples to produce the most high-fidelity rules as it is often hard to predict YARA rule performance given the limited view of an individual researcher.

Some of the known bad and known good data sources for YARA rules performance include VirusTotal, Hybrid-Analysis, VirusBay, Malpedia, Microsoft, and VirusShare. Florian Roth’s tool yarGen includes some of the necessary string and opcode datasets for YARA performance checks as well. Another excellent tool for YARA rule management is the KLara tool developed by Kaspersky.

One of the major abilities of YARA rules that lead to successful and long-term hits is combining both string-based and code-based coverage. We believe that the key to efficient YARA rules depends on simple and clear rulesets utilizing both. I highly recommend watching Jay Rosenberg’s presentation from Confidence Conference 2019 entitled Utilizing YARA to Find Evolving Malware.

When creating code reuse YARA rules, we need to be aware of compilation flags, different compilers, and slightly altered code that can change the code and break the YARA rules. Consequently, we should wild card ?? certain instances such as used registers, which can change from one sample to another.

For example, various instructions such as xor eax produce different opcodes depending on the xor’ed register. Skipping opcodes with “[1-2]” from one to two bytes is often necessary to survive compilers and make the YARA rules cover different environments.

The cyclical nature of the YARA rule development can be described in the following 7 steps:

Dridex by far is one of the most complex and sophisticated pieces of malware on the crimeware landscape.

The malware is also referred to as “Bugat” and “Cridex” by various researchers. The original Bugat malware dates back to 2010, which at some point rivaled the “Zeus” banking malware.

The development group behind it is responsible for the three malware variants, which are the subject of our YARA course: 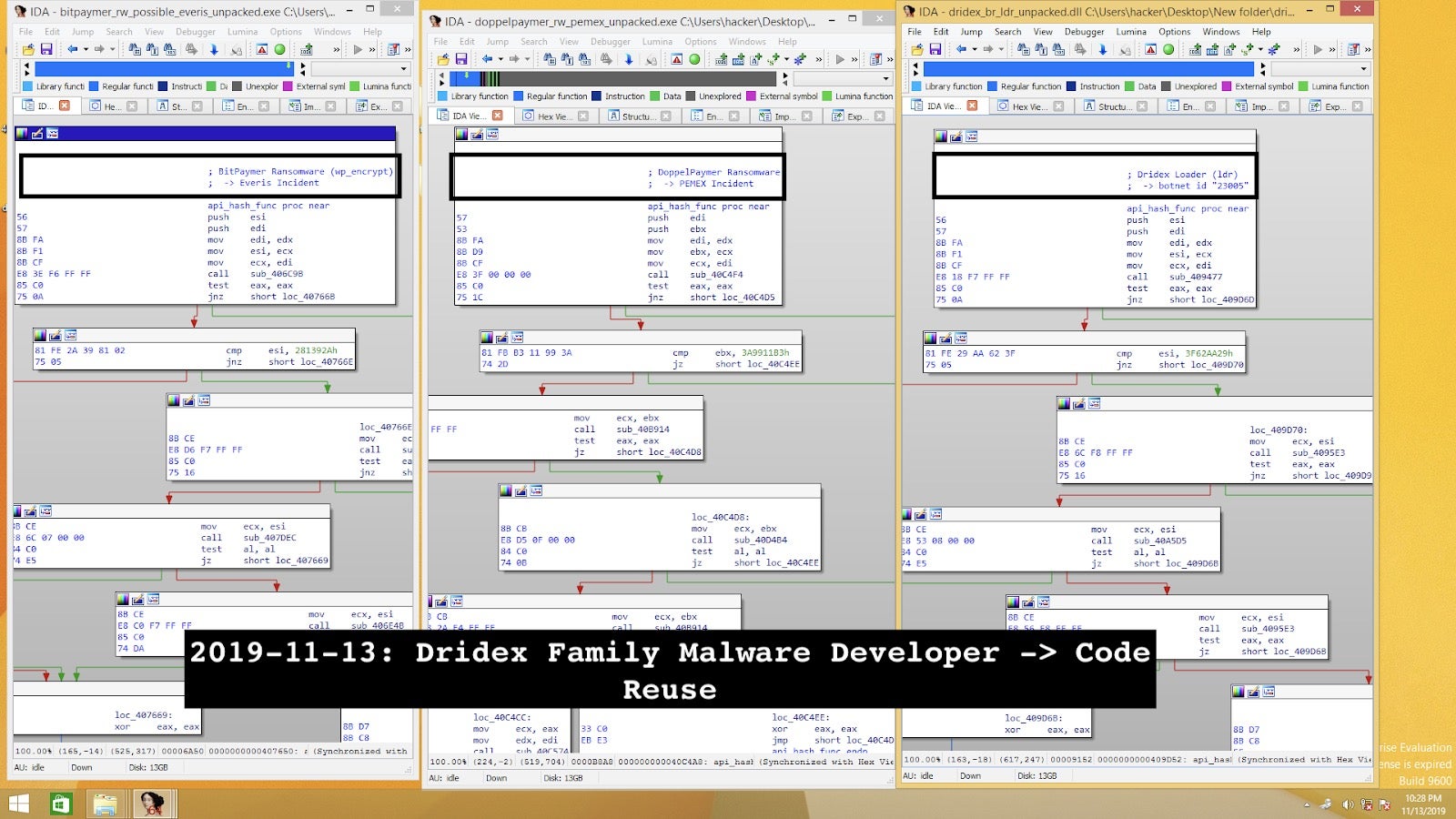 The YARA rule for the overarching code reuse across the Dridex developer samples is based on the unique API hashing function used to resolve the Windows API calls. It is one of the most obvious unique features of this family.

The Dridex developer family can be described by this YARA rule as follows based on the API hashing function (as seen on the screenshot above):

Always test the rules, for example, via command-line:

Testing the YARA rule reveals multiple hits on the Dridex family across the folder. 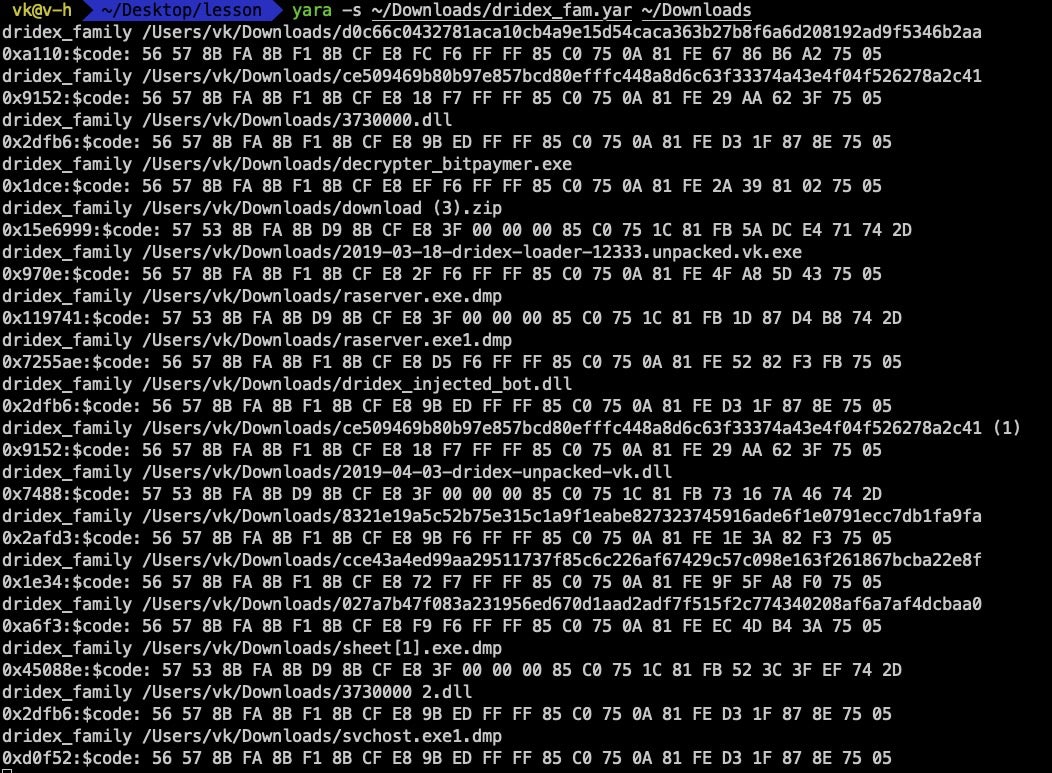 I. DoppelPaymer ransomware contains a peculiar string reused across samples we can add to the Dridex family code reuse. It copies the unicode string "setup runn" to eax via lstrcpyW API call.

The possible specific DoppelPaymer ransomware rule is as follows: 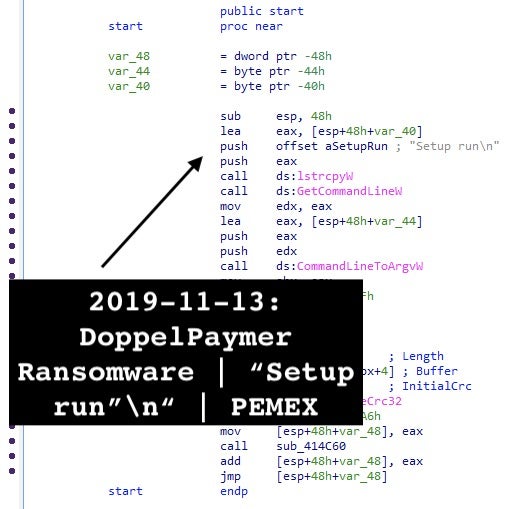 II. BitPaymer ransomware contains the same referenced string across the samples aimed to act as anti-Windows Defender emulator checking the existence of the file "C:\aaa_TouchMeNot_.txt", which is indicative of Windows Defender sandbox activity.

The possible specific BitPaymer ransomware rule is as follows:

III. Across the Dridex loader samples, this malware carries the same string "installed" called via OutputDebugStringW many times acting as anti-emulator. It is indicative of the Dridex loader.

The possible specific Dridex loader rule is as follows: 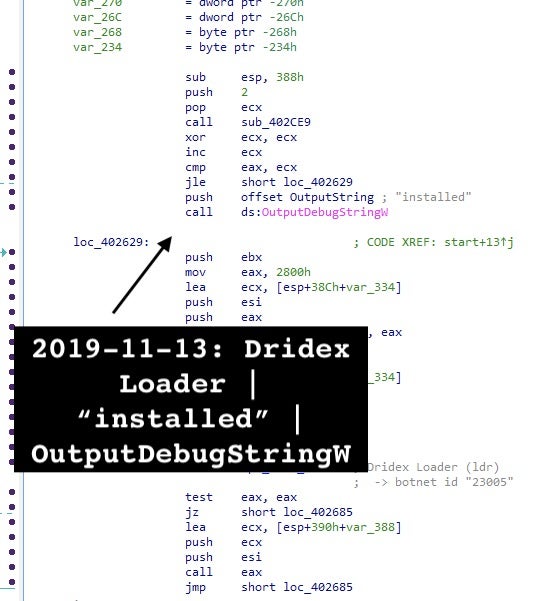 The final YARA rule, for example, covering both code and strings for the DoppelPaymer ransomware unpacked payload is as follows: