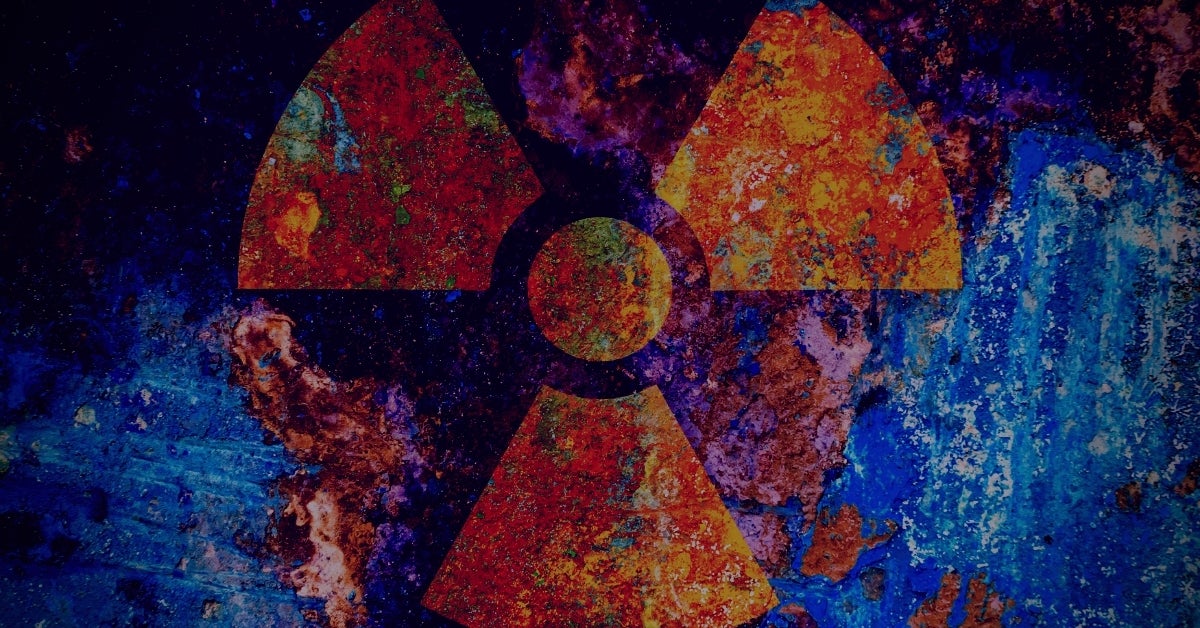 While new ransomware families are a common occurrence these days, a recently discovered ransomware dubbed ‘DarkRadiation’ is especially noteworthy for defenders. First, it targets Linux and Docker cloud containers, making it of particular concern to enterprises. Secondly, DarkRadiation is written entirely in Bash, a feature that can make it difficult for some security solutions to identify as a threat. In this post, we’ll take a look at the DarkRadiation Bash scripts and show how this novel ransomware can be detected. 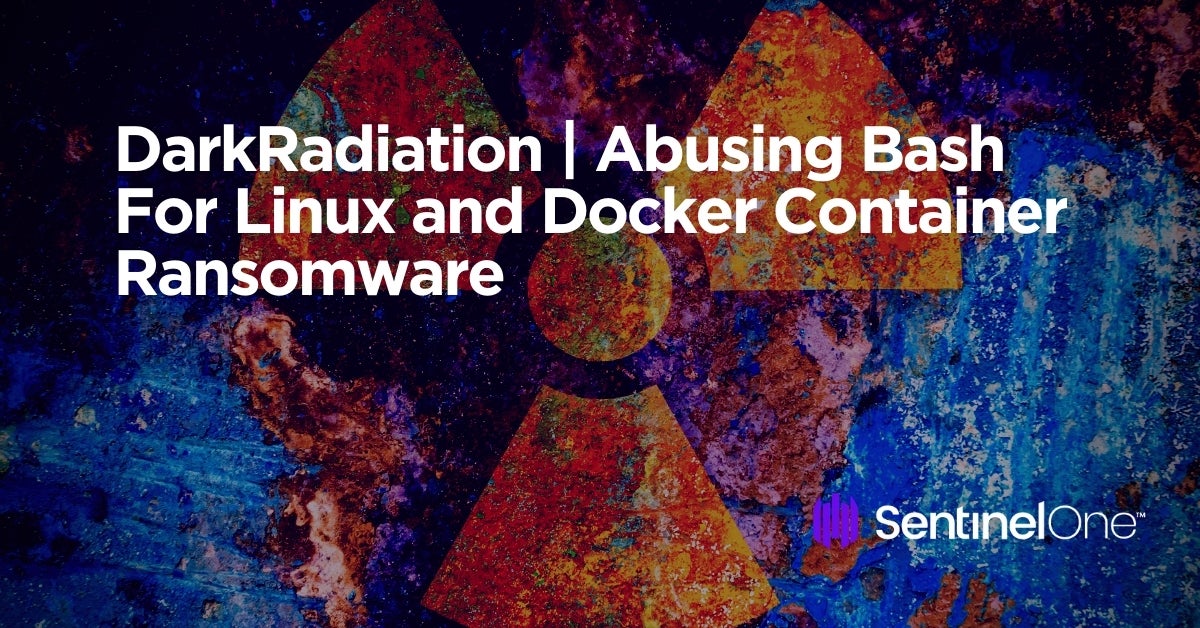 DarkRadiation appears to have been first noticed in late May by Twitter user @r3dbU7z and was later reported on by researchers at Trend Micro. It appears to have come to light as part of a set of hacker tools through discovery on VirusTotal. 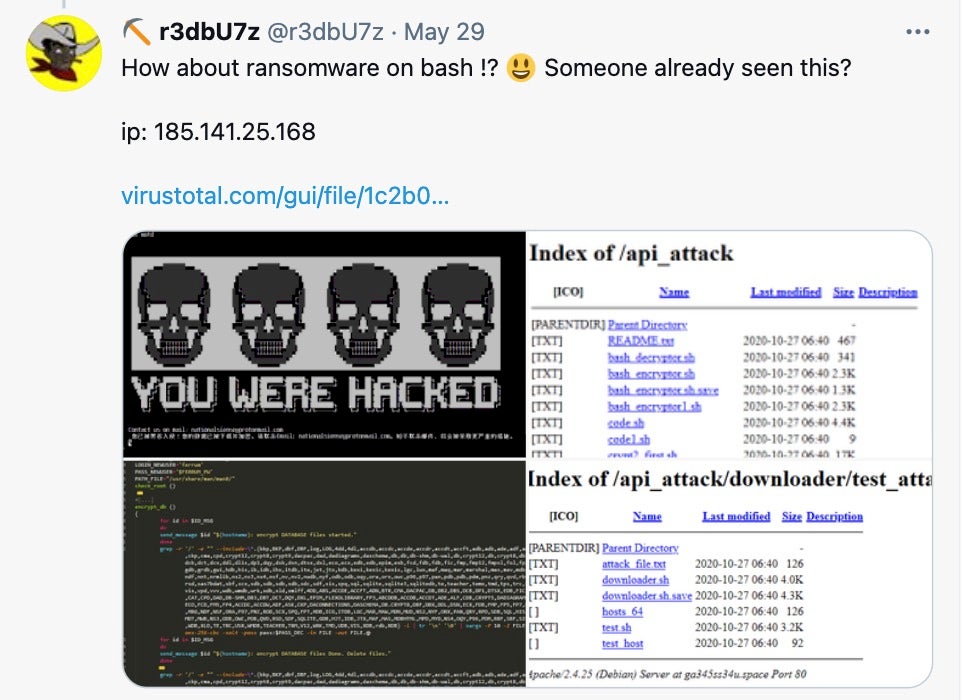 At this time, we have no information on delivery methods or evidence of in-the-wild attacks. However, analysis of its various components suggest that the actors behind its development intend on using it as a campaign targeting Linux installs and Docker containers.

The ransomware uses a complex collection of Bash scripts and at least half a dozen C2s, all of which appear to be currently offline, to communicate with Telegram bots via hardcoded API keys.

The DarkRadiation scripts have a number of dependencies including wget, curl, sshpass, pssh and openssl. If any of these are not available on the infected device, the malware attempts to download the required tools using YUM (Yellowdog Updater, Modified), a python-based package manager widely adopted by popular Linux distros such as RedHat and CentOS.

Code artifacts in the same script show the ransomware attempting to stop, disable and delete the /var/lib/docker directory, used by Docker to store images, containers, and local named volumes. Despite the name of the function, docker_stop_and_encrypt, it appears that at least in its current form it acts purely as a wiper for Docker images. However, as other researchers have noted, several versions of these scripts were found on the threat actor’s infrastructure, suggesting that they may be in nascent development and not yet ready for full deployment.

In order to facilitate communication, the ransomware relies on another script, bt_install.sh, to set up and test a Telegram bot, written to the local file path at "/usr/share/man/man8/mon.8.gz". Fans of the popular science fiction trilogy “The Matrix” may recognize the test message, “Knock, knock, Neo.” included in the bt_install shell script.

The same script also installs and enables a service called “griphon” as a way to gain persistence. If the malware has been run with admin rights, the service is installed as “griphon.service” at the default "/etc/systemd/system/" path and ensures the Telegram bot is brought up and running each time the device is re-booted.

The ExecStart command ensures that the bot is started either on system boot or by manual invocation of the service via systemctl.

The ransomware script exists in several versions called supermicro_cr and crypt. An obfuscated version in the attacker’s repository uses a simple technique that we’ve seen before in shell script-based malware, which has been common on macOS for a while. The technique involves assigning random variables to “chunks” of script code.

Comments left in the code in Russian suggest the author used an npm package called node-bash-obfuscate’.

Despite the apparent complexity of the obfuscated script, all such scripts can be easily translated back to plain text simply by replacing the eval command with echo, which prints the script to stdout without executing it.

On execution, the script creates a new user with the name “ferrum”. In some versions, the password is downloaded from the attacker’s C2 via curl and in others it is hardcoded with strings such as “$MeGaPass123#”.

For the purpose of avoiding accidental discovery, the ransomware writes itself to "/usr/share/man/man8/", a folder typically reserved for the man pages associated with System administration controls: in other words, a directory not likely to be traversed by chance even by admin users. Moreover, in order to facilitate privilege escalation, the script uses a fairly blunt but often wildly effective ‘social engineering’ technique: by simply asking the user for the required privileges.

The execution chain is caught by the SentinelOne agent and reflected in the Management console:

If allowed to execute, the ransomware script uses openssl (one of the dependencies we noted earlier) to encrypt files enumerated via the grep and xargs utilities. Encrypted files are appended with the extension .☢️, and the encryption key is sent to the attacker’s C2 via the Telegram bot.

How SentinelOne Deals With DarkRadiation

For endpoints protected by SentinelOne, DarkRadiation is blocked from the outset, so there’s no risk of any data being encrypted by the malware. As always, it’s safest to have your SentinelOne endpoints use the ‘Protect’ policy to ensure that threats are killed and quarantined automatically. When this occurs, the Management console gives a full report of what processes were killed and quarantined, and shows associated MITRE TTPs in the Threat Indicators panel.

In the demo video below, we show how SentinelOne deals with DarkRadiation using the Detect-only policy.

Malware written in shell script languages allows attackers to be more versatile and to avoid some common detection methods. As scripts do not need to be recompiled, they can be iterated upon more rapidly. Moreover, since some security software relies on static file signatures, these can easily be evaded through rapid iteration and the use of simple obfuscator tools to generate completely different script files.

However, no amount of iteration or obfuscation changes the nature of what the malware actually does on execution. Hence, security teams are advised to use a trusted behavioral detection engine such as SentinelOne Singularity that can detect malicious behavior before it does harm to your Linux systems, servers or Docker containers.

If you would like to learn more about how SentinelOne can help secure your organization, contact us for more information or request a free demo.