What is an Incident Response? Your IR Guide for 2022 - SentinelOne

What is an Incident Response? Your IR Guide for 2022

Incident response, or IR, is an organization’s reaction to an attempted information security breach.

Sixty-five percent of organizations cite fragmented IT and security infrastructure as a key barrier to increasing cyber resilience. While stopping attacks early in the kill chain is critical, organizations must be well-versed in incident response and remediation. 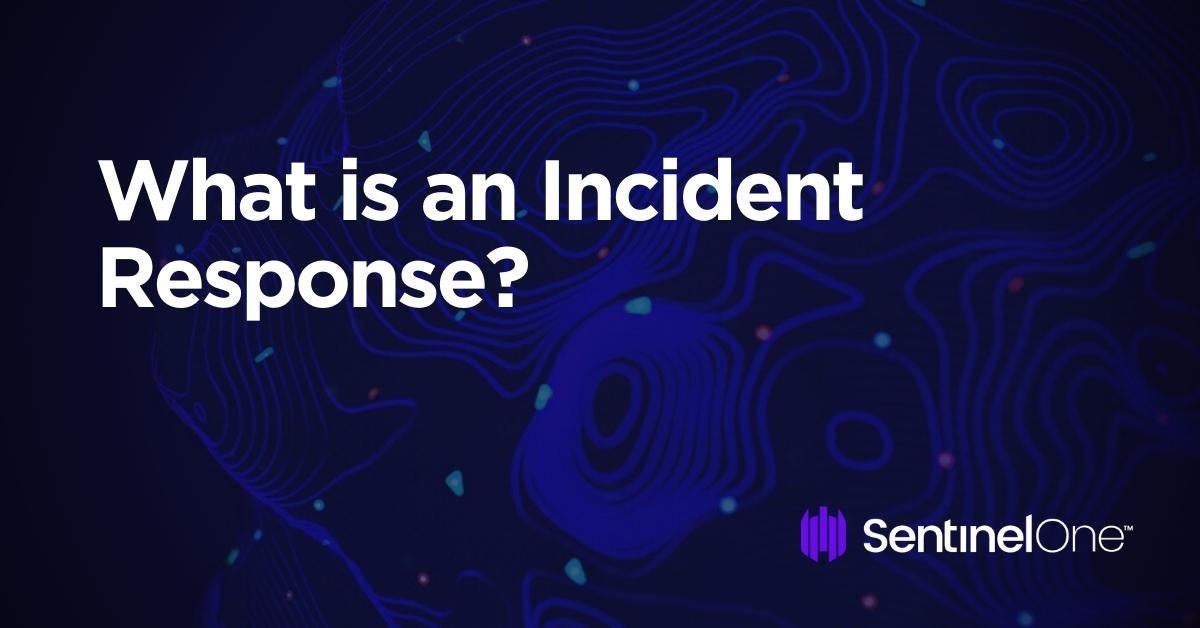 What is an Incident Response (IR)?

Incident response plans usually include a detailed set of activities that provide analysis, detection, and defense, and the effectiveness of the response may affect the integrity of personal and corporate information. A single vulnerability may reveal other organizational weaknesses that become significant factors in a response.

The lessons learned from an attempted breach can measure the efficacy of an organization’s security controls. Mistakes are often the most effective teachers, and learning from them can prevent a recurrence of a security breach.

What are Incident Response Firms?

Incident response firms are companies that specialize in helping organizations respond to and manage the aftermath of a security breach or cyber attack. These firms typically have teams of security experts who can assist with a wide range of services, including conducting forensic investigations to determine the scope and nature of the attack, providing guidance on how to secure the affected systems and prevent future attacks, and working with law enforcement to help bring the perpetrators to justice. Incident response firms can also help organizations develop and implement incident response plans, which outline the steps to take in the event of a security breach. These plans are essential for ensuring that organizations can quickly and effectively respond to cyber attacks and minimize the damage they cause.

What is an Incident Response Plan?

According to the National Institute of Standards and Technology, an incident response plan:

Establishes procedures to address cyber attacks against an organization’s information system(s). These procedures are designed to enable security personnel to identify, mitigate, and recover from malicious computer incidents, such as unauthorized access to a system or data, denial of service, or unauthorized changes to system hardware, software, or data (e.g., malicious logic, such as a virus, worm, or Trojan horse).

An IR plan usually documents the responsibilities of people, processes, and technology, using this documentation to prepare security personnel for responding to various cybersecurity incidents.

Why You Need an Incident Response Plan

For many organizations, the marked increase in frequency of ransomware and other destructive malware attacks often requires security and IT teams to work in tandem to stop attacks before they progress and potentially cause damage.

However, security teams often struggle with too many tools, too many alerts, and not enough resources to address every threat. Meanwhile, IT teams can lack visibility into the actions security teams perform on the endpoints, cloud workloads, and IoT devices they maintain.

An incident response plan can provide a systematic approach to handling such cybersecurity incidents. A practical IR framework guides organizations through identifying and containing a cyber intrusion while minimizing the cost.

To reduce the consequences of such an attack, cyber incident response procedures are often coordinated closely with contingency solutions, including:

While contingency planning helps recover the operation of designated information systems at an existing or new location in an emergency, incident response planning typically focuses on the entirety of a security incident, including detection, response, and recovery.

An effective IR is often successfully implemented through an Extended Detection Response (XDR) security and data platform. These platforms offer proactive approaches to new threats, respond without human intervention, have multisite and multi-tenancy flexibility, and provide visibility from a unified standpoint.

With a single pool of raw data comprising information from the entire ecosystem, XDR aims to allow faster, deeper, and more effective threat detection and response, collecting and collating data from a broader range of sources.

A systematic approach to managing a cyber attack can guide organizations through an otherwise catastrophic event and prevent future attacks. Here are the typical steps involved in incident response:

Preparing against a cyberattack typically requires:

Recognizing malicious activity can include:

Organizations often face a constant threat to the security of data and financial information. Incident response examples may be malware that installs viruses such as Trojans, worms, adware, spyware, and ransomware.

Once a threat is detected and identified, containing it involves:

Eliminating all traces of contamination from a security intrusion often requires:

Returning to business as usual after an attack can include:

Standardized software that can coordinate and expedite incident response processes may help both security and IT teams better respond to security incidents. Most organizations stand to benefit from an Extended Detection Response (XDR) security and data platform that can ingest data at scale, perform AI-powered analytics, centralize security incident response, and interconnect IT and security platforms for autonomous response capabilities.

SentinelOne provides AI-powered prevention, detection, and response across endpoints, cloud workloads, and IoT devices to stop and prevent incident responses. When corrective action needs to occur, SentinelOne can kill, quarantine, remediate or roll back any potential effects from the threat.

And this all happens at an enterprise scale with precise, context-driven decisions autonomously, at machine speed — without human intervention.

Get a demo of SentinelOne.